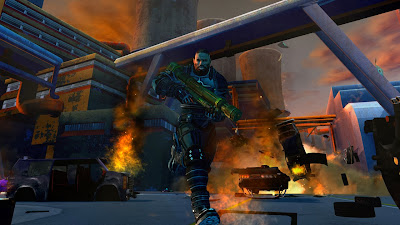 Power fantasy video games broadly emphasise environmental and psychological disconnects. Players are typically cast as lone adventurers who relentlessly come into conflict with their surroundings. Sand box games exacerbate this feeling, it's just you against an entire city calibrated to your undoing. Crackdown started you out as an athletic human, tasked with droning about a city dispensing jack-boot justice. You had an assigned arsenal, bolstered by arms seizures, with a fleet of cars back at the base. All the better to battle entrenched gangsters. So far so street level. Take your time to explore though and you came into contact with a drip-feed of floating power-ups.

Snatch enough and eventually your abilities were raised far beyond the mortal realm. Max out your stats though, and you'd barely need equipment. You were now the weapon. At peak you could leap tens of feet vertically and horizontally, your territory now in the sky. This created an immediate disconnect. Your landscape was transformed from urban grime to an airy, skyscraping loneliness. Feuding with criminals began to seem less vital, maybe even trivial. They could be thwarted in brief, hopping blitzkriegs, your limits rarely tested. Interest shifted to exploring and testing the upper limits of your character's physicality. Could I make that jump? Is the top of that building within my reach? This agenda break also emphasised the condition of your avatar, a blank slate super-soldier, unwillingly locked into reward tasks and undaunted by morality. You didn't explore your super-identity by crushing inferiors, you deconstructed it through escape.
Posted by Chris Ready at 23:58:00