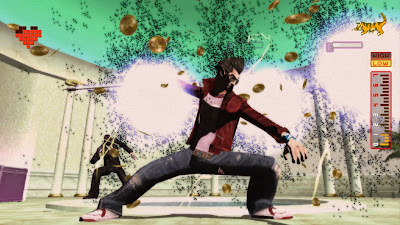 The gamification of the single male dilemma. Aspiring assassin Travis Touchdown lived in a shitty apartment full of dust and wank prompts. The city around him was an anonymous jumble of brick warehouses, spotted with pop culture outlets that sold nothing but wrestling tapes and gaudy t-shirts. Unlike other video game cities, there wasn't very much to do in No More Heroes. Presumably this was because Travis' had an extremely narrow world view. He just wasn't interested in anything other than himself. Since our hero was a complete narcissist, there were a few token sops to self-improvement. There's a gym to improve stamina which, thanks to having to pump the Wii Remote like a dumbbell, inspired an actual sweat. Brand new special moves could also be learnt by visiting a bar and getting into fights with a drunken, surly Russian. Most open world games are stuffed full of distractions. Acres and acres of malfunctioning content, designed to actively waste the user's time. No More Heroes bucked this trend, narrowing its focus onto one sweeping hand gesture, the Wii Remote as lightsaber, and then working hard to make that as fun as possible through buzzing feedback and exploding enemies.
Posted by Chris Ready at 20:44:00