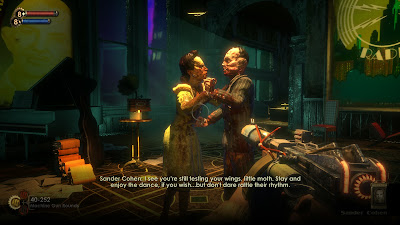 BioShock offered players a one-way ticket to Rapture, an underwater utopia on the wane. Ayn Rand's Atlantis was built to house the great minds of the post-World War II world. Artists, industrialists and philosophers crammed in tight and unburdened by morality. Cast as an interloper, players got to poke around and investigate the aftermath. With minimal friendly faces around to tell the tale, a timeline is established through exploring and collecting the diary fragments scattered about the ruin. Rapture's citizens were promised paradise but reductive class systems still emerged, eventually prompting a popular revolution. There were less obvious examples though. Everything in Rapture told you a story.

Rapture was hermetically sealed by design. This was its flaw. A healthy culture is built out of mutations and alien invasion. Foreignness informs a fluid, growing intellectual consciousness. Rapture failed because it assumed it already had everything it needed. It could only build on the elements it already had, hence Rapture is monument to an incestuous obsession with early twentieth century art movements - Jazz, Deco, Futurism. With nowhere else to turn, the city turned inwards, consuming itself. BioShock offered the chance to sightsee around this cultural apocalypse. You took in the sights. Gauche bunny art built out of murdered people. Nannies with car wreck faces that whispered lullabies to sleeping pistols. Rivers of discarded refugee clothing, patrolled by pyromanic Policemen. It was like no place you'd ever seen before. Sadly, there's been nothing quite like it since.
Posted by Chris Ready at 14:07:00