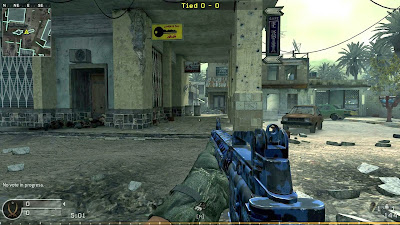 Call of Duty 4: Modern Warfare ditched the moral certainty of World War II, taking the series forward several decades to arrive in the midst of a post-Cold War fog. The covert missions that formed the backbone of the campaign were nasty snatches of ruthless wet working. An assassination here. An ethnic cleanse intervention there. Infinity Ward drafted a muddled theoretical conflict, utilising hot potato concerns like break-away ex-Soviet nations and Islamic fundamentalism, to take the player somewhere other than the beaches of Normandy.

Despite this, one of Modern Warfare's most triumphant aspects was simply chatter. Your time with the 22nd SAS regiment was full of state sanctioned murder and cold-blooded euphemisms. This pally back and forth registering as gallows humour, rather than tone-deaf posturing. A mission set aboard a Lockheed gunship had an alarming, almost documentary sense of reality about it. Modern Warfare was a rare game that seemed informed by solid research instead of just raking over the same old 1980s action films.

The real juice in Modern Warfare though was the multiplayer mode, an unending avalanche of feedback and positive reinforcement. Guns and loadout perks were rationed on a keen trickle, meaning there was always an interesting piece of kit to chase. Every conceivable action tallied towards some form of reward, from exciting new rifle sights to simple XP currency. There was an exhaustive list of conditions to be met, congratulating players for both the mundane and the superlative. In-game kills granted access to rewards that ran the gamut from an in-game radar sweep to a match shredding Hind attack helicopter. Modern Warfare gobbled time. There was always something new to learn, or something old to modify.
Posted by Chris Ready at 17:44:00