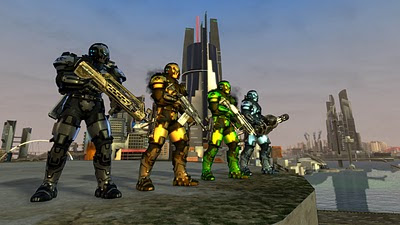 It's been a decade since your lonely skyscraper scaler brought jack-boot justice to Pacific City. In this dash flavoured sequel, the fascistic Agency is still floundering, fighting off science rebels by day and swamped by zombie hordes at night. Players are cast as some sort of legacy clone of the original Agent, complete with an all-new poor draft face, their body swamped in anonymous hyper armour. Likewise, the city is drained of character, rendered as a yawn of identikit slums and dilapidated future space. This world once popped with heavy ink outlines and sizzling neons, now it's just a thick paste of greys and browns. Crackdown's three wildly divergent gang zones are rendered as mulch; barely indistinguishable ruins with sticky window sills.

Your double-front enemies are also faceless, their takedown a tick-list of regurgitated actions and events, with only the barest slither of a tale to unite them. Capture the throw-up fortress, babysit the UV bomb, prevent a troglodyte invasion. There's a hint that yet again this Pacific City pandemonium is Agency created, but the slow-drip story is vapour, never amounting to anything more complicated than a reward cinematic at completion. Crackdown 2 still allows players to sculpt a human weapon, even rolling out all-new abilities for the truly determined, but the fizz is gone. Curious players are better off revisiting the wonderful original.
Posted by Chris Ready at 14:26:00