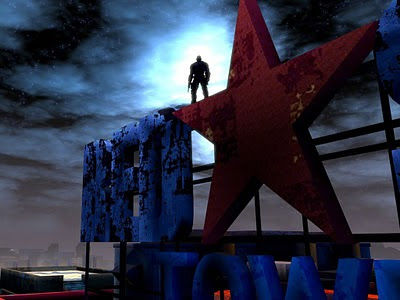 Power fantasy video games broadly emphasise environmental and psychological disconnects; players are typically cast as lone adventurers who relentlessly come into conflict with their surroundings. Sand box games exacerbate this feeling: it's you against an entire city calibrated to your undoing. Crackdown starts you out as an abilities heightened human, tasked with droning about your city dispensing jack-booting justice. You have an assigned arsenal, bolstered by arms seizures, and a fleet of cars back at the base, all the better to battle entrenched gangsters.

Experience and floating pick-ups eventually raise your abilities far beyond the mortal realm, to a point were you barely need equipping. You are now the weapon. At peak you can leap tens of feet vertically and horizontally, your territory now in the sky. Landscapes are transformed from street level grime to skyscraping loneliness. Battling with criminals begins to seem less vital, they can be thwarted in brief, hopping blitzkriegs. Your interest shifts to exploring and testing the upper limits of your character's physicality. Can I make that jump? Can I get to the top of that building? This agenda break also emphasises the condition of your assigned doll, a blank slate super-soldier unwillingly locked into reward tasks and undaunted by morality. You don't explore your super-identity by crushing inferiors, you deconstruct it through escape.
Posted by Chris Ready at 14:19:00