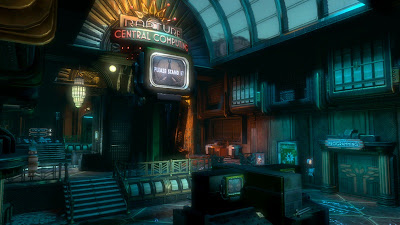 With the main series off to explore castles in the sky, this last gasp DLC for BioShock 2 could be the final trip to Ayn Rand's Atlantis. Closure for this originator strand lurks tantalisingly close thanks to the discovery that Rapture houses a monstrous super-computer with the calculative means to puzzle out a cure for the city's geneticl subversion. As in the main BioShock 2 campaign, players again take control of a prototype Big Daddy, here a blunt force slave tasked with invading a facility at the behest of a some puny humans. Despite appearances to the contrary, 2K Marin aren't simply replaying a previous avatar beat for the sake of asset frugality. This Big Daddy has a distinct role to play in a tale that noodles on war and the individual, the flexibility of race in a universe of biological customisation, and industrialised personality.

BioShock 2's vast arsenal is supplemented here with a withering laser rifle, and a singularity plasmid that turns frothing mutation mobs into spinning balls of fleshy debris. Legacy plasmids and weapons are rationed atypically to any previous game blueprint, forcing the user to reconfigure their strategies to better suit what's available; discovering the finer points of less popular abilities in the process. With no research means available, opponents stay strong throughout Minerva's Den. Security robots in particular become ferocious, persistent nuisances. There's no shortage of them either, even mom and pop Splicers prowl this underwater IBM assisted by mechanical bodyguards. Minerva's Den is an excellent example of a DLC epilogue, it provides a concise slice of melancholy, new toys to experiment with, and addresses some of the disappointment perhaps felt when it was revealed that we mightn't be returning to Rapture anytime soon.
Posted by Chris Ready at 12:09:00