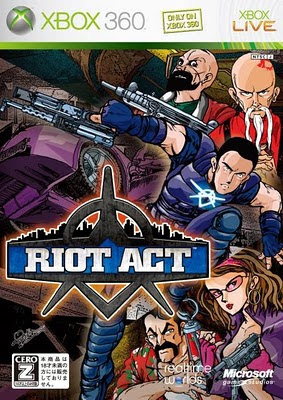 For its Japanese release, sandbox superhero smasher Crackdown was carefully rebranded to better cater to perceived audience tastes. Out with an enormous, muscular black man! In with a lithe burning-guts everyman with a faint whiff of Monkey Punch's Lupin about him! Title change aside, the rest of this covered cover is more a conceptual reorganising of the original US eye-catch. The lead switch is interesting though, ignoring any ideas about avatar apartheid, the shift seems to be as much about the sort of figure that best represents each markets masculine ideal: America favours a stomping brawn powerhouse, very much in the mould of a professional wrestler. Something aspirational. Japan favours an obtainable nondescript, that'll likely win through on personal ingenuity rather than raw power. Neither is misleading either. Each rendering represents a distinct state of the game's hero too - at the beginning your character will be physically smaller. Your agent begins as a wiry enforcer, slowly mutating into a hulk state as you acquire experience.
Posted by Chris Ready at 15:52:00