The Transformers #5 by Mark Bright 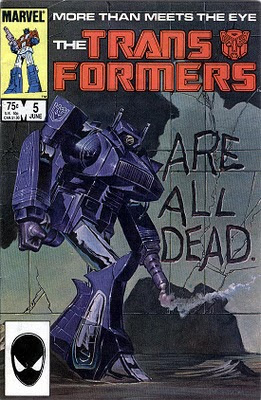 Looks like Shockwave is being pencilled in as the main threat in Michael Bay's Transformers 3. Although wildly unlikely, it'd be cool to see Shockwave portrayed like he was in the Marvel comic series. Instead of the toady henchman of the animated series, Marvel Shockwave was an insanely powerful wild card who operated on pure computated logic. He observed no loyalty to any commander he deemed faulty, routinely slaughtered dinosaurs, and paraded Optimus Prime's severed head as a trophy. Above is Mark Bright's iconic cover to The Transformers #5. In this exciting issue Shockwave hangs several dead Autobots from a ceiling and then puts his feet up and watches some television.
Posted by Chris Ready at 12:33:00