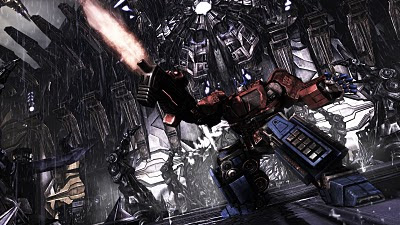 High Moon Studios certainly start off on the right foot; playable cast is a pick 'n' mix of Bay movie bruisers and curios from the recent angular animation series, topped off with a glut of Generation 1 mainstays. Cybertron is rendered as a clashing, weaving mass of technology upon technology, guiding players from fascistic scramble cities to derelict snake-pipe underworlds. The transformers themselves are spikey recalibrations of typical drafts that compliment the brutally utilitarian landscapes. If not original, Transformers: War for Cybertron's overall look does have an agreeable sense of identity, meshing nostalgia nudges and brand concerns, while honouring the aesthetic demands of this created world.