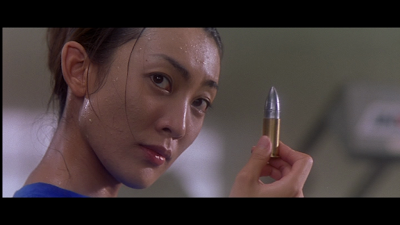 The title may be Godzilla vs Megaguirus, but the King of Monster's most dangerous opponent is Misato Tanaka's Kiriko Tsujimori, an ultra capable Major attached to the G-Graspers, a bright and smiley special forces unit tasked with taking down the kaiju monarch. Godzilla vs Megaguirus exists within a continuity all of its own. In this universe Godzilla is a recurrent threat to Japan, appearing every couple of decades to stamp Japan's latest technological advances into the ground. The monster's usual role is lightly tweaked. Rather than be specific to nuclear power, Godzilla exists as a natural balance to all unchecked, potentially dangerous, scientific progress.

Tsujimori has first-hand experience battling Godzilla during one of these landings. With her unit and commanding officer crushed under rubble, Tsujimori stared down the rampaging beast armed only with a bazooka. After failing to prevent him from destroying an experimental plasma energy, she has spent the intervening years honing her body and waiting for another opportunity to battle the power plant slasher. Tsujimori is exactly the kind of quietly driven lead that could have lit up the military scenes in the limp Godzilla vs Mechagodzilla II. She's focused, professional, and leads by example. Thankfully, the film is also never tempted to define the character romantically. A scruffy scientist exists for her on the periphery, but it's clear she considers him a colleague and nothing more. Tsujimori is allowed to be an individual.

Masaaki Tezuka's first entry in the series is handsome and punchy, despite an obvious budget shrink since the Heisei heydays. Tezuka fills his frame with the monster's faces, holding on their toothy maws, and letting them act. The finale showdown between Godzilla and Megaguirus is a rough and tumble affair, with minimal computer generated augmentation. Rather than hose each other down with laser beams, the two creatures make use of their physical dimensions and attributes. Megaguirus is pretty handy with her stinger, much to the chagrin of Godzilla's crotch. A few glimpses of piano wire aside, Kenji Suzuki's work here is much improved from the lacklustre Godzilla 2000: Millennium. As well as the wonderfully spiky Megaguirus, the special effects director and his team have produced a scale reproduction of the Tokyo waterfront that stands up to the withering scrutiny of daylight filming.
Posted by Chris Ready at 14:32:00