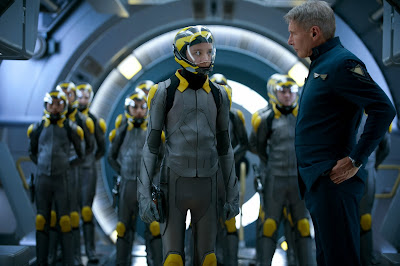 After repelling an alien invasion, mankind recruits children to fight an abstract counter-attack. Hoping to tap into the flexible morality of juveniles, the all-encompassing International Fleet scoops kids up at a young age, then pumps them full of kill co-ordinates and deprives them of sleep. Training is experienced as a series of games with win conditions that not only account for cataclysmic sacrifice, but seem to require it. For a film being sold as kiddy franchise kick-off, Ender's Game is incredibly upfront about the emotional violence being perpetrated on these pre-teens. It posits a universe in which the individual is only useful as an amoral aberration, able to dispense with notions of human value and knuckle down to a percentages game. These children aren't loved or encouraged, they're deliberately placed in harsh, damaging circumstances in the hopes that their injuries will temper rather than break their resolve. Ender's Game is the best science fiction war film since Starship Troopers.
Posted by Chris Ready at 23:35:00