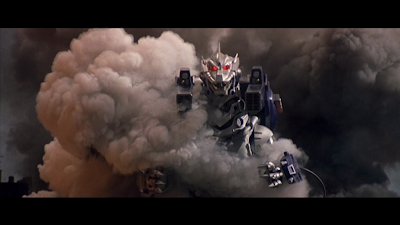 Godzilla Against Mechagodzilla's problem is that the hour preceding the Tokyo stomp finale is a little too good. Masaaki Tezuka's film is exciting and genre literate, full of visual quotes from mid-sixties Ishiro Honda classics like The War of the Gargantuas. Against is layered with an obsessive fatalism; plot also shifts based on the malfunctioning agendas of supernatural cyborgs. Basically it promises so much more than the rote last act is capable of delivering. The film builds itself around a sullen mazer technician and her all-consuming survivor's guilt following a disastrous attempt to repel Godzilla. Lieutenant Akane Yashiro gets her chance for revenge when the Japanese Self-Defence Force dredge up the bones of the 1954 King of Monsters, using them to create a bio-robot doppelgänger named Kiryu.

When Godzilla lands again, Akane and Kiryu jet off to face him. After hosing down the nascent monster monarch, Kiryu's death blow is interrupted when Godzilla's roar reawakens this Mechagodzilla's former identity. Akane is powerless to stop the cyborg kaiju from blasting the surrounding city to dust. Godzilla retreats to the ocean, while the JSDF wait for Kiryu to burn himself out. Although included to simply function as your standard mid-point obstacle, this idea of a cybernetically enhanced ghost Godzilla trying to reclaim his throne is so exciting that it dwarfs anything that can possibly follow. The effect is accentuated by the Millennium series' pocket universe remit where, theoretically, anything can happen. When this zombie Godzilla is subsequently discarded via an aside about reprogrammable DNA computers it feels like a betrayal. Godzilla Against Mechagodzilla teeters on the verge of being excellent but, by obeying formula, it ends up only very good.
Posted by Chris Ready at 15:56:00