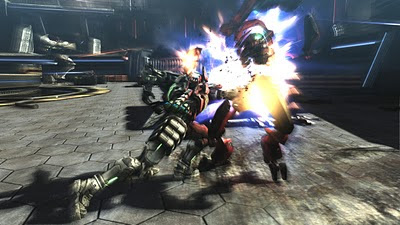 Coming off an abortive attempt to wring even an ounce of fun out of Fallout: New Vegas, Vanquish was a tonic. Shinji Mikami's latest is about relentless, agitated movement; whether that be a sprint towards your enemy for a full health clash, or a zippy retreat to let your shields recharge. You never sit still. Vanquish is a rock solid recalibration of populist cover mechanics polluted with boss rush gameplay and Japanese mech-suited heroism. Play is essentially just dealing with a series of partitioned, foe heavy arenas. Juggle rocket-man skill sets and on-fly weapon load-outs, whilst harassed by an endless charge of communist robots. Short, and designed specifically for Game+ super-play, Vanquish feels like a heyday Capcom title - Godhand with guns, or PNO3 with cigarettes and dick-man swagger.
Posted by Chris Ready at 13:39:00