Respawn Entertainment kicked off the year in style with Apex Legends, a free-to-play Titanfall spin-off that has ended up completely eclipsing its parent game. Compared to other Call of Duty adjacent Battle Royales, Apex distinguished itself with free-flowing, player-launching, traversal. Instead of attempting to build a reasonably realistic ghost town, Respawn have carefully moulded multicoloured, vertical playgrounds, tailor-made to leap in and around. The scaled up environments and churning vistas (not to mention the shrinking safe area) push the player forward, pressing them up against endless opportunities to panic.


A total cheat, since everything contained within the Contra Anniversary Collection came out decades ago. The justification I'll be using today is that, thanks to ace retro devs M2, this museum compilation finally presents the European version of 1994's Mega Drive classic Probotector without PAL slowdown. This uptick in refresh rate turbo-charges an already unforgiving game, taking it from a methodical 50Hz to a seizure-inducing 60.


An office, the classic video game location. It's recurrence across genres and platforms no doubt reflective of the fact that every person making video games is stuck in some variation of this setting for massive amounts of their lives. So it goes that, classically, video game workplaces are a venue to show off environmental destruction models. Who doesn't want to obliterate their jail? There are desk and chairs to be overturned; papers and their weights to swirl around in throbbing, telekinetic tantrums. Control goes even further, positing its place of business is a vast, churning, concrete space. A headquarters exploded in every single direction, without any care for realistic or even logical architectural traversal. Control is a video game built around exploration and input models that cater to an expanding set of movement abilities and the player's desire to push these emerging skills as far as they can. 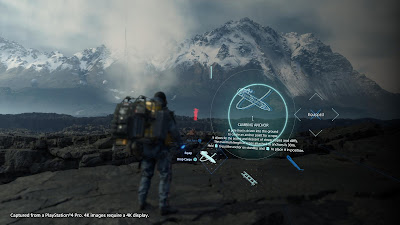 I'm still finding my way with Death Stranding. The game's cut-scenes are obnoxiously long and exposition heavy - not ideal when you're trying to squeeze in an hour or two of gameplay when you find yourself at a loose end. What Hideo Kojima's latest does have though, and this is obvious as early as the calibrations menus displayed on first boot, is a world-class level of production. Clearly, no expense has been spared steering Kojima Productions' latest vision into your hands. So far the game has required some only light stealth, steering Norman Reedus' quivering Postman through chasmic gaps in ghostly enemy formations, but the best of these early moments strike a more leisurely chord. The experience sings when it leaves you alone to lug your deliveries over picturesque, prehistoric looking environments with the sounds of Kojima's personal Walkman tinkling away in your ears.


Devil May Cry 5 is a dream come true. Even more so than the Resident Evil 2 remake (see below), Dante's fifth adventure represents Capcom re-embracing their past successes rather than bumbling further towards the exhausting, busywork, game design synonymous with a company like, I don't know, Ubisoft? Following an entire generation of game releases that looked to shallow blockbuster trends and games of telephone with western development studios to set the pace, the Osaka company are back, concentrating their efforts on the finely calibrated combat experiences they made their name with. Devil May Cry 5 makes no attempt to reinvent the idea of one against many, instead the super sequel pointedly inherits a half-dozen games worth of design mechanics, remixing them in a best-of package topped off with a histrionic Jump comic storyline about sons punching fallen fathers, again and again, until they're good again.


Loosely based on Taito's stubborn old belt action coin-op, The Ninja Saviors: Return of the Warriors retains the same rigid horizontal progress but mixes up the slashing and crashing with a gang of controllable ninjas that feel slightly out of whack with their coin-gobbling origins. The original arcade game (available on at least the PS4 as part of Hamster's Arcade Archives series) demanded a rigid approach to gameplay, damning customers with a surprisingly vulnerable robot ninja and enemy patterns designed to expose ignorance of the game's peculiar mechanics. Return of the Warriors is much more sympathetic. Although players are still swarmed from all sides, the characters they control have deeper, more useful move-sets that, at times, feel like the arbitrary inputs and over-powered outcomes assigned to the kind of unplayable Boss characters you might access through ancient hack cart trickery.


Capcom's remake of Resident Evil 2 retains the same, basic, item gathering motor as Hideki Kamiya's original. Players still pinball around a police station, hoovering up intricately designed keys and unattended weaponry, but the opportunity for success in 2019 has been dialled way down. The game no longer stocks you up for action-adventure, bullets are rare and aiming is annoyingly analogue. This Resident Evil 2 then is firmly horror. Raccoon City's police headquarters is a mausoleum; cold, dark and uninviting. The actorly, accentuated movement of your player character registers as a rolling disturbance rather than a keyed-in digital input. You're waking this place up - responsible for all the horrors that stir. You prod at this space's secrets as you sag and bumble towards the next lead. Another tweak: nowhere is safe from recurring annoyance Mr X. An experienced player, saddled with an unshakeable tail, might jog back to the lobby save area for a bit of peace. Not only will the Tyrant follow you all the way but, to your alarm, it'll actually trespass into your former sanctuary.


Like playing every Sonic the Hedgehog special stage all at once, Sayonara Wild Hearts sweeps you up with its swirling, fizzy confidence. Simogo's game transports you to a dreamy abstract, requiring deft but not overly complicated inputs; stages run the gamut from high-speed chases to locked-in rail shooters. The star of the show is Daniel Olsen and Jonathan Eng's electropop soundtrack, the perfect compliment to a gameplay model that recalls the best of Sega's Naomi board era arcade games.


Nominally a part of the stealth action genre, Untitled Goose Game arms players with a waddling, haughty bird capable of incredible malevolence. Unlike sneaking contemporaries that balance out their assassin's power with halting fail states, Untitled Goose Game builds its loop around a title character who simply refuses to be told off. This goose enjoys a privileged position within this world, bolshing and honking its way through all manner of basic swindles and petty larceny with almost complete impunity.


Bitmap Bureau's twin-stick, Mega Drive throwback Xeno Crisis traps the player is a series of claustrophobic rooms, each seething with cutesy, super-deformed monsters and crunchy Yamaha noise. Controllable characters - your choice of colour-coded space marines - snap to your inputs, zipping around like they're on roller-skates. There's even a minimal, pleasurable drift when you stop, a pleasant sop to momentum that (thankfully) never endangers your run. Power-up drops are randomised; sonic electronic ball-breakers are present but a lot less likely to show up than refills for your sputtering, faithful old machine gun. And while the enemy expulsions never get near bullet hell levels, delicate, darting movement is required to navigate the throng of creatures closing in around you.