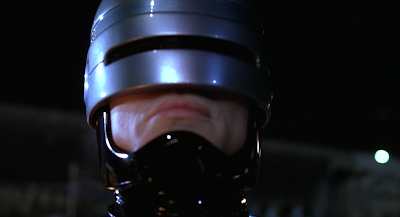 For a series built entirely around one character, the RoboCop films have a bizarre approach to continuity. The first entry was about a dead man encased in an armoured, metal coffin slowly unravelling from the programming that had been imposed on him. A key scene in Paul Verhoeven's film depicts this reanimated corpse looking at its face in a shard of broken glass. RoboCop, finally free of his bolted-on helmet, pores over lines and features as a way to come to terms with the ruin that has been made of him. Edward Neumeier and Michael Miner's screenplay even concludes with RoboCop discarding his branded identity to proudly declare that he should be known by his human name, Murphy.

RoboCop 2 backpedalled with a lead character who shunned the vestiges of his former life to wrap himself up in duty and his hyper-alloy chassis. Perhaps being a post-human unable to pursue anything meaningful beyond his job was simply too painful? RoboCop 3 goes even further, beginning with a hero who behaves like a lobotomised toy - complete with action accessories - only dimly aware of the connections he made before his death. Part of the problem is the need for an arc, per the three-act mandate, RoboCop must grow and change to satisfy the audience. There's no need for this recap-cum-reset though, RoboCop 3 is even more future-shocked than the first two films.

To make way for OCP's prefab future, American citizens are being packed onto buses by South African mercenaries to be driven to God-knows-where. Their crime? Being poor. That's really the only transgression the film requires. RoboCop abandoning the hopelessly compromised police force to embrace a less collectivised idea of civic service is more than strong enough to build a film around. Director Fred Dekker's threequel, working from a screenplay co-written with chronic worrier Frank Miller, feels revised and re-worked to the point of having lost its basic shape. Scenes in which Robo surveys children being roughed up by the hired goons of corporate America are included to prickle this robot's latent, submerged emotions, rather than prompt the deep-seated revulsion felt by a person who has fought hard to regain their own humanity.

The transition that powers Murphy's story needs to come from the undead police officer's decision to stop collaborating with the corrupt ruling class and become, essentially, a folk hero. The strength of this idea is dampened and distorted by the clattering mechanics of Murphy's clumsy, needlessly synthetic portrayal. Although there's power in Robert DoQui's Desk Sergeant turning in his badge to join the revolution, the film's failures are compounded by Orion's determination to ease off the shredded flesh in pursuit of a family friendly cinema rating. RoboCop's bubbling rage can no longer be expressed through his trademark ultra-violence. Having discovered that OCP's apartheid muscle are liquidating Detroit's working class, Murphy's response should be significantly stronger, and more cathartic, than simply wandering into the Afrikaan's staging area to set fire to their stationary.
Posted by Chris Ready at 22:54:00