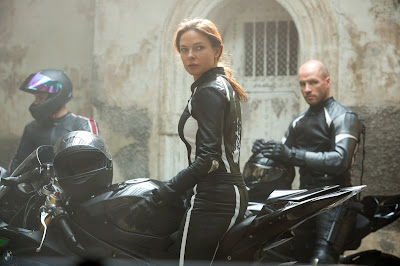 While the rest of the 80s relics struggle with box office obsolescence, Tom Cruise goes from strength to strength. His formula? Rather than hoard the limelight in pursuit of past, pumped-up glories, producer-star Cruise is happy to share the big screen with supernaturally accomplished women, cutting them in on the deal at a conceptual rather than superficial level. Edge of Tomorrow (or Live Die Repeat if you came to the film on home video) charted the rise of Cruise's William Cage from PR ooze to someone Emily Blunt's super soldier Rita Vrataski was happy to co-operate with. Mission: Impossible - Rogue Nation replays the trick with Rebecca Ferguson's Ilsa Faust, a shadow struck from the Red Grant mould who demonstrates the same capricious, see-sawing interests.

Hunt's fascination with the obviously duplicitous Faust reveals the kind of growth you'd expect in a comfortable, ageing super-spy. At this stage in his life Hunt knows his way around a deception. He's is no longer the delusional worrywart who willed Claire Phelps' betrayal away, he's established and confident enough now to contextualise Faust's treacherous streak as, essentially, flirting. After all, she hasn't killed him yet. Beyond an obvious, fizzy, professional respect, Hunt clearly sympathises with the precariousness of Faust's assignment. Like his 96 self, she's gifted but inexperienced, moving amongst sharks at the behest of a paternal overlord that explicitly treats her as expendable.

Cruise's insistence on keeping Hunt monastic, even asexual, post-Mission: Impossible III lends the relationship an interesting tension too. It's nothing so simple as a desire to possess, Hunt seems to see himself in Faust. She's a prospect. Perhaps he'd rather shape the rival agent into an ally than outright dismiss her as a threat? Kill off the bad fathers competing for Faust's soul then reconfigure her into a replacement for the ageing IMF agent. Writer-director Christopher McQuarrie's weaves this conceit into the bones of Rogue Nation, tracking Faust throughout as a co-star. She's always a distinct, dangerous presence with murky, even malleable, purpose. Sometimes she needs to be Hunt's ally. Sometimes she doesn't. Unlike the jealous, threatened Jim Phelps of Mission: Impossible Hunt isn't scared of obsolescence, he's excited by the possibility of a continuity beyond himself. Tested by age, Hunt defeats his mentor yet again by refusing to sink into the same, limited patterns of self-pity.
Posted by Chris Ready at 22:50:00