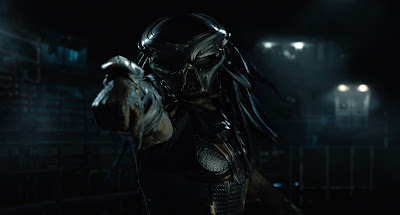 The Predator lumbers along with three storylines competing for attention. The first, and most obviously similar to director-co-writer Shane Black's previous work, revolves around Jacob Tremblay's Rory, a lonely, autistic child. When not dodging some especially mean bullies, Rory tinkers with the alien technology his drug-warring Dad (Boyd Holbrook) has FedEx'd back to the suburbs. Next there's Olivia Munn as Casey Brackett, a kidnapped biologist so thrilled by the idea of  extraterrestrial life that she runs straight at, rather than away from, the intergalactic big game hunter. The third is mostly set on a bus (at night) and concerns a group of committed (as in asylum) soldiers trading barb after barb while preparing to make their big escape.

Each thread contains details that might, basically, align but never with any great thematic heft. There's something vulnerable and complimentary about a bored university lecturer and a precocious kid decoding, then turning the tables on, the invisible alien stranded in their neighbourhood. Maybe at one point that was Black and co-writer Fred Dekker's pitch? Come the finale Casey does more to protect Rory than any other character, including his father, physically placing herself between the child and the enormous fuck ugly mutant that the trailers couldn't wait to tell us about. Unfortunately for fans of The Monster Squad, expecting a similar Vestron irreverence, The Predator is too busy killing time with damned badasses dying in impenetrably darkness to work up any serious, residential chaos.

In fairness the film does have a few good scenes though, bright spots that can't help but sing given their rote surroundings. Rory zipping around the neighbourhood on Halloween night, vanquishing spoilsports with an explosive energy weapon is exactly the kind of comedic lawlessness you expect from a pre-teen in a Shane Black film. Similarly, Casey chasing down seven feet of pure bludgeon, armed with a plastic tranquilliser gun and her supermarket flats feels fresh in a series primarily concerned with bubbling testosterone and wounded masculinity. These clips are adrift though, trapped in a whole that struggles over and over again to establish even basic spacial relationships. The Predator, perhaps fittingly for a film about a transparent monster, is strangely shapeless. It rejects the idea of coverage as a way to deliver information. Scenes do not luxuriate and pertinent details are not poured over. Visually the film so utterly rejects any notion of continuity or readability that it's genuinely difficult to make sense out of routine scene-to-scene transitions.
Posted by Chris Ready at 16:37:00