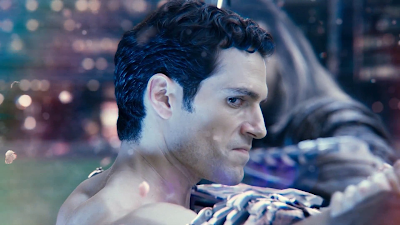 It's difficult to discern any overarching thematic aims in Justice League. Although flawed in different ways, Zack Snyder's previous DC Universe films were constructed around an intent beyond simply providing a road to your standard blockbuster confrontation. Man of Steel asked what kind of Superman would modern America produce, while Batman v Superman: Dawn of Justice imagined two heroes poisoned and brought low by the 24 hour news cycle. Both films were plotted using their characters as the engine. Began by Snyder and screenwriter Chris Terrio, then massaged to a conclusion by writer-director Joss Whedon, Justice League is much more routine, at best registering as a two hour effort to rehabilitate the onscreen image of Henry Cavill's alien superhero.

Despite a brief blip in which the Man of Tomorrow trashes his new side-kicks, Justice League's portrayal of Superman uses his death as a fresh break, allowing the character to return to life behaving with the tranquil assurance of Christopher Reeve. This Superman rises again thanks to Dawn of Justice's Kryptonian birthing chamber being turbo-charged by a bastardised version of Jack Kirby's Mother Box. Justice League lingers on another detail though, one that explicitly recalls Marlon Brando sacrificing his holographic life in Superman II: The Richard Donner Cut. As Jason Momoa's Aquaman submerges Superman's body in the ship's puss coloured amniotic fluid, a photograph of Kevin Costner's Pa Kent finds its way into the goop, the insinuation being that this mistake is crucial to Clark's new-found stability. Both Supermen are revitalised by consuming digitised approximations of their fathers.

There are a few glimpses of Terrio and Snyder's apocalyptic torment in amongst Whedon's reflex zings, most obviously in a Bushido code Batman and Ray Fisher's depressed Cyborg. The film's mechanoid is a young man forced back to life by his scientist father, using the same invasive, all-powerful extraterrestrial technology that rebooted Superman. Cyborg's early scenes introduce a being who remembers being alive but cannot reconcile his former identity with the rootless chimera he has become. A pall hangs over Cyborg. He rattles around his father's apartment, testing his new body's spontaneous upgrades and gloomily observing the world outside. Nudges are woven throughout the film, perhaps at one point designed to underscore the character's potentially dangerous disconnect with humanity. They never go anywhere. The film is too busy racing between expensive set-pieces. The fangs have been filed out of Justice League's head.
Posted by Chris Ready at 01:14:00