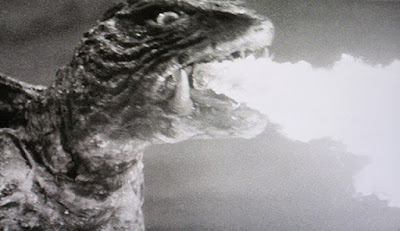 This American chop-job of Gamera: The Giant Monster amplifies the basic city-stomping premise, exploding the scope of the giant turtle's destruction from a few isolated appearances off the Japanese coast to a full-on, catastrophic world tour. Unfortunately for Gammera the Invincible, this escalation is communicated through dull office set-ups and circuitous dialogue rather than an expanded suite of exciting special effects shots. Localisation director Sandy Howard laces Noriaki Yuasa's film with bursts of secretarial faff, all shot flat and sensible.

Survive the meeting room intrigue and Invincible eventually treats the viewer to the murky, atmospheric effects photography of Nobou Munekawa. Gammera's rampages see the giant turtle rubbing up against various factory landscapes, all of which are battered beneath his feet. Presumably nocturnal, Gammera is only glimpsed at night, the all-encompassing darkness accentuating the turtle's flamethrower head and the white-out electric shocks that irritate him. Despite the attempt to iron out the film's peculiarities for a drive-in crowd, it's Munekawa's camera work that leaves the biggest impression. If anything the mind-numbing war council scenes provide a stable point of contrast for the ethereal sight of enormous, inky smoke clouds lingering over the ruin of heavy industry.
Posted by Chris Ready at 23:37:00