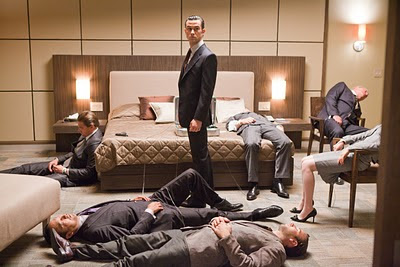 Inception is an absurdly expensive flight of fancy. Christopher Nolan's film jumps off from a big-lie idea of a whizz-tech that allows people to break into each other's dreams. We are lead slowly through sequences that establish and demonstrate the various mechanical laws that allow interlopers to dabble around in foreign subconscious - naturally, this wonder science is used as a primary tool for industrial espionage. Machine established, the film then becomes a launch-pad for weaving together a series of clashing action sequences, each one set at a distinct simulation level of the quarry's dreamscape. These action plains intersect and distend, spinning in and out of each other at a frequency close to parody. Inception invents a behaviour ruleset, then gleefully vandalises it. It's not in love with characters; instead it finds joy in establishing a new idea, then gleefully kicking the chair out from underneath it. Inception works on blockbuster beats, peopled by mission men who deal in broad, cool strokes. It's a heist film where everything goes wrong and experts have to think on their feet, the central job quickly becoming wildly irrelevant to the action of performing it. Along the way enough details are left nagging to undermine all of the reality we have witnessed; micro-details and spectral figments take on alarming meaning the deeper we tumble into our players.
Posted by Chris Ready at 15:38:00