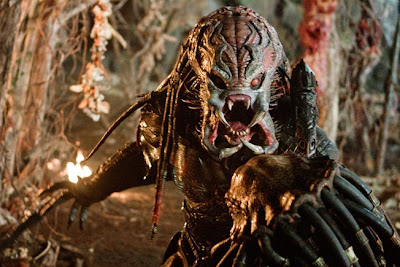 Umpteen psychopaths fall out the sky onto a rainforest planet. As they traipse deeper into the jungle, they encounter lethal prehistoric pack animals, the booby trapped remains of another kidnapee, and a trio of chameleonic hunters. The set-up for Predators initially plays like an agreeably schlocky repurposing of John McTiernan's 1987 breakthrough. Were Predator gradually revealed itself to be a near hopeless struggle for survival, Predators could be the funhouse re-jig, riffing off unexplored grue cues for wink-wink kicks.

That's the idea. In practice, Predators plods on aimlessly, rapidly junking anything with the potential to be enjoyable to concentrate on delivering the most artless knuckle-header in recent memory. The action is flat and dreary, most encounters boiling down to two muscular clods repeatedly charging at each other, thwacking together in an unreadable mumble. Predators is a median lump, lacking Predator's sense of psychological desperation, and barely even trying to compete with Predator 2's day-glo vandalism. It doesn't even have the common decency to be exceptionally violent. Predators simply exists to be another franchise installment. There is no love, or even interest in this film. It's the cynical result of disinterested businessmen feigning passion to gain access to the contents of your wallet. It's product.
Posted by Chris Ready at 23:09:00

This is a message for the webmaster/admin here at disasteryear20xx.blogspot.com.

Can I use some of the information from this post right above if I provide a link back to this site?