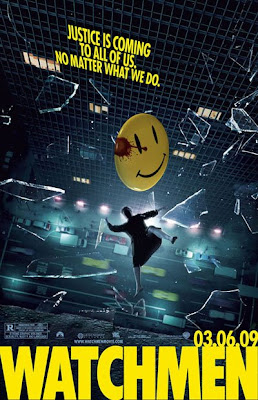 Here's the Scream Awards Watchmen tease Snyder insists he prepared himself. Clip includes some shilling by principles; taste that insincerity! New footage does little to allay fears that the whole film has been shot in slow motion - however, I do see the thinking behind it; it stalls the image, albeit in a mechanical fashion, much like a reader taking time over a particularly astonishing image. Rodriguez and Miller's Sin City mash-up coulda' done with some of this time dilation, instead they amped up the narrative into a breathless sprint. That said though, Miller's manga infused image avalanche plays better to that particular brand of stylisation; Gibbon's maths panel begs for a more restrained, stylistically anaemic patter. Watchmen is more '92 Eastwood deconstruction than 60s Spaghetti belter. Ramble. Ramble. Displeasure must be strongly noted at Rorschach's newfound Sammy Davies Junior wall-run powers. Dear, oh dear. It's pretty central to Watchmen's thesis that Dr Manhattan is the only full blown superpower - the rest are all various creeds of degenerate playing dress-up. Word 'round the campfire is a massive chunk of the ending has been jettisoned too - no Harryhausen fans in Snyder's house? The knock on effect of which rather muddies some celestial noodling on man's relation to a God. Moaning and whining aside, I'm sure Watchmen will make for a much better film than than the ideologically compromised V For Vendetta movie or the dunderhead League of Extraordinary Gentlemen adaptation. Feint praise indeed. That was meant to sound positive! I'm a dreary nerd blogger. Quick! Think of something nice. Erm. I really liked Manhattan disassembling the tank! That was wicked.
Posted by Chris Ready at 20:09:00

It's still that song that gets it all going. The footage itself looks music video of course. Lack of dialogue being offered up so far is maybe a cause for concern, or maybe I'm just a cynical old twat these days.

Heh. Did you read about the end change? Bah!