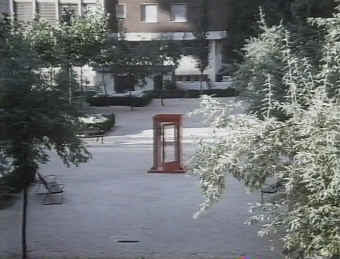 Happy Halloween! Being a generous sort, I thought I'd jab your present at you a little early. No need to thank me. I'm great like that. Traipse after these links below and find 1972 Spanish horror short La Cabina. For non-Spanish speakers that's: The Telephone Box. Cabina is a queasy, sweaty short, in which a knock-about silent comedy pratfall slowly matures into a pitiless desperation horror. Directed by Antonio Mercero, Cabina was infrequently broadcast on BBC2 as either late night filler in the 70s / 80s; always on hand to freak out night-owls when live allocated programming didn't quite fill a slot; or in a horror double bill with George Romero's lesser seen riot shocker The Crazies. Outrageously, Cabina is not easily available anywhere. There are rumours of an out-of-print multi-disc retrospective DVD release collecting a slew of Mercero shorts in the director's native Spain, although, unfortunately, I've never quite managed to find out much about the set. So, failing a brief root around torrent sites, youtube will have to do. The version linked here lacks English language subtitles, but fret not! All dialogue is merely perfunctory, and superfluous to the cringe inducing, unknowable machination frights. Broad, expressive, continental European acting helps too. Once seen, never forgotten. LA CABINA!

Legendary! I actually remember seeing the box set for sale! Someone had a link to the site it was on at imdb, was forever ago now though so god knows if it's still there.

Woah! I saw the link on imdb too, I didn't get to follow it up though, think I was in work when I spied.