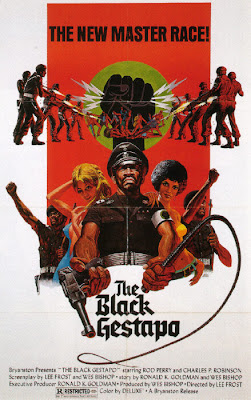 With a whitey title like that, I gotta be part of the problem! The Black Gestapo limped out at the tail end of the Blaxploitation cycle; grasping for ideas, one bright spark hit upon the truly bizarro idea of having a Black militant group adopt the aesthetic trappings and ideology of 1940s German fascists. Quite! Their objective? Putting the collective boot in on sleazy Italian mobsters flooding their neighbourhood with drugs and vice. Those swines! Starting out as brownish shirt self determined do-gooders The People's Army of Watts, events soon spiral greedy, and before you can say "Honky Bastard!" these National Socialists ain't no better than Nazis! Watch the trailer here, and discover that rather than a chilling Orwellian treatise on the corrupting nature of power, Lee Frost's Black Gestapo is a sleaze-o rape-in bottom feeder of a flick blessed with a wicked gonzo infamy title. You still want to see it!
Posted by Chris Ready at 19:52:00