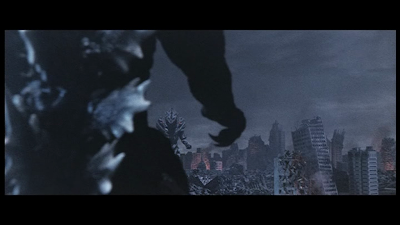 Just so you know it isn't fucking about, Godzilla: Final Wars begins at the South Pole in the midst of a nuclear war. The Japanese Prime Minister from Godzilla: Tokyo SOS commands the submarine battleship Atragon in a final, desperate battle against The King of Monsters while all reality collapses around them. This is Ryuhei Kitamura's film in a nutshell - an adrenalised rummage through the Toho back catalogue with an emphasis on violent flippancy. Kitamura ditches the regal splendour of the last two cycles to zero in on Godzilla as a manoeuvrable, unbeatable scrapper.

Although fresh from international success with Versus and the insipid Azumi, Kitamura is a bold choice for Toho. Like the Bond producers the studio tends to play risk averse, preferring to stick with tested hands and groomed talent. Kitamura's idea of Godzilla is an impertinent slugfest told with the visual language of V-Cinema. Heroes are moustached mixed martial artists or amped-up pop stars with bad attitudes. Heroines are shot leg first, and outfitted for pinku thrillers. It's a trash cinema aesthetic that blends wonderfully with the smoke choked devastation of Eiichi Asada. The special effects director's work is reminiscent of Teruyoshi Nakano, with whom he worked on The Return of Godzilla. Everything is brutal and distinctive, washed in rubble greys and void blacks.

When it can drag its attention away from a team of backflipping mutants, Final Wars puts Godzilla to work. The basic premise of Destroy All Monsters is inverted, placing Godzilla in the antagonistic King Ghidorah role. Freed from a couple of trillion tons of Antarctic ice, The Big G must travel the globe thumping former kaiju allies who are stuck in the thrall of cool guy aliens. Final Wars isn't about radioactive calamity or mankind perverting the laws of nature, it's about who's the best toy. It's Godzilla as the coolest, most powerful action figure grinding lesser merchandise beneath his heel. Although overlong and a little too excited by routine shonen superheroics, Final Wars is basically delightful. It's exactly the kind of film the latchkey kid from All Monsters Attack would make.
Posted by Chris Ready at 00:26:00