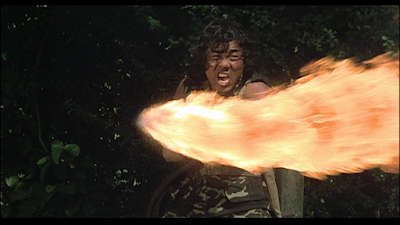 As close as you're going to get to a sweaty, malarial cannibal movie from John Woo. Heroes Shed No Tears follows an all-action squad of well-equipped badasses as they escort a Golden Triangle crime boss out of the jungle to face prosecution. Like the aforementioned man-eater exploitation films, Heroes throbs with a real sense of lawlessness, beyond even the usual intensity associated with the Hong Kong film industry's rough-and-ready approach to health and safety. Civilians are butchered and beheaded by chattering enemy soldiers, partly to establish their strength, but also to puncture the overwhelming boredom of their checkpoint billet. Our heroes just shrug.

When situations (not to mention foliage) allow, Woo exacerbates this unease with low, prowling camera angles that zone in and out on the film's exhausted soldiers like a big cat looking for a meal. Wildly improbable and cursed with a wandering, discursive plot, Heroes was thrown together to complete one of Woo's pre-fame contractual obligations then expected to rot on a shelf due to its lack of bankable star power. Shot as The Sunset Warriors, the film was eventually released packaged with a few scenes of staid nudity added after the fact and a new, romantic title to cash in on the success of the director's chivalrous, stratospheric A Better Tomorrow. Despite Golden Harvest's trepidation, lead action figure Eddy Ko does have a memorable look - blazing, emotionless eyes that shine through oozing trauma and the kind of rigid, frozen features usually seen in a Japanese seizure comic.

Unfortunately Ko just doesn't move like a Chow Yun Fat. Likewise, the film's various weapons do not registers as mechanical extensions of the actor's body. Indeed his marksmanship acting resembles a child playacting as a commando, painting the world with his expulsive, never-ending gunfire. Thankfully Heroes isn't all empty calories, although the film's few diversions are probably best appreciated as nebulous examples of themes and concepts that Woo would explore in his later, better films. Heroes contains both the overt, Christian injury imagery that would define The Killer's climax as well as the idea that war zones act as a catalyst for the kind of selfish, split-second decisions that pulse through Bullet in the Head.
Posted by Chris Ready at 00:27:00