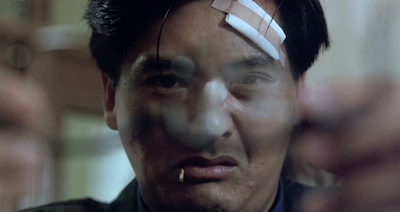 Following their problems shepherding A Better Tomorrow's tumultuous sequel to the screen, Tsui Hark and John Woo went their separate ways. Despite this inability to cooperate on further entries in their debonair gangster series, both filmmakers remained committed to scrutinising the events that forged their heroes. Woo had pitched a prequel episode that used the Vietnam War as a testing ground that would allow the director to reexamine these characters away from their own, conquered, urban arenas, while simultaneously using a besieged city to illustrate the stresses of the then-impending Hong Kong handover. After the split Woo kept his script but lost his usual gunslingers, landing at Golden Princess before turning in the incredible but financially unsuccessful Bullet in the Head.

Hark raced ahead with his own prelude, beating Woo to a cinema release. The former producer retaining, not only the big ticket branding, but the films' breakout star as well. Rather than stick with New York hardman Ken as a way to keep Chow Yun-Fat in the franchise, inheritor director Hark rewinds the clock for an instalment that takes place before Mark has even had the chance to pall up with Ti Lung's solemn hood. Set in 1974, A Better Tomorrow III follows Mark as he jets back and forth between Hong Kong and Vietnam, attempting to uproot his nearest and dearest before Saigon falls. Since Mark is still wet behind the ears, the role of ice cold badass falls to Anita Mui's Kit, a pleasant twist in a series where women typically get very little to do other than fret.

Kit, a gunrunner with shady government connections, acts as both a love interest and a teacher for Mark, slowly helping him build the persona that will one-day allow him to unite the Sung brothers and vanquish dozens of henchmen. Hazy, idealised interludes depict Kit instructing Mark how to dead-eye glass bottles; she even gifts him his trademark duster. Piece by piece, the Mark Gor we know takes shape. Although the film never explicitly comments on it, it's clear that Kit is building herself a perfect partner - an equal she can have further adventures with. As the film rolls on it is eventually revealed that Kit isn't pulling these traits out of thin air, she is extrapolating and adjusting Mark's new super identity based on her memories of a former lover and present-day threat, played by Saburo Tokito.

For a brief moment hints of Vertigo start to creep into A Better Tomorrow III. Anita Mui as a two-fisted Scottie Ferguson, needling and cajoling a handsome prospect until he fits a pre-established idea of a boyfriend. Unfortunately Hark isn't particularly interested in this note. Mark never confronts Kit about the similarity and Tokito's Tanaka never gloats. The ex is simply an obstacle for our hero to overcome. Hark's film also suffers following the chopped-up, elegiac chaos of Woo's duo. In both of his A Better Tomorrow films, John Woo used slow motion as a way to accentuate the moments in which his characters made decisions or took decisive action. Slow, dreamy movements, often followed by a whiplash snap back to harsh, mutilated reality. By comparison, Hark overcranks simply to show us how cool it is when the barrel of a gun is swept from one side of the frame to the other.
Posted by Chris Ready at 22:50:00