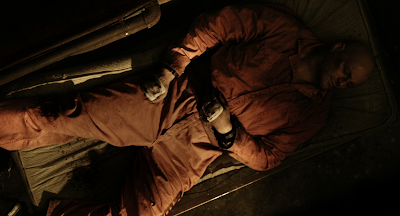 Brawl in Cell Block 99 asks the viewer to reassess the looming physical presence of Vince Vaughn. Usually seen with a medicated sweat, bug-eyed and chattering away in a buddy-buddy comedy, Vaughn has never been cast explicitly to make use of his considerable size. Preconceptions aside, it seems obvious that the six foot plus actor is capable of the kind of towering menace that would be right at home in a prison combat movie. Despite this, Cell Block acknowledges the potential disconnect of Vaughn as a meat-and-potatoes Riki-Oh by slowly deconstructing the audience's baggage with the actor, drip-feeding incident and visual information that teaches us about his character, Bradley Thomas.

Cell Block teases Bradley's startling capacity for violence with a series of basic danger flags. These are then undermined with a couple of deft, contradictory feints regarding the man's temperament and how that feeds into an ability to subsume instinct and quietly calculate. When we meet Bradley he's working, the camera notes that he's tall and frowning, clad in faded black denims and a matching, washed out black t-shirt. While not quite speaking to the ordered perfectionism of a well kept uniform, there is a sense that Bradley dresses himself a little neater than a jobbing tow truck driver really needs to.

The cut of the clothes, not to mention Bradley's scowling attitude, suggest the kind of blue collar snobbery you find in minimum wage white supremacists - they might look like a lower income grasper but they've made their outfit drabber, as if a neat, character free fit combined with a funereal affectation inherently makes them more professional. Bradley's head is also bald, shaved down to the bone, a bovver boy look that aligns with our worries about Bradley's personal politics or, at the very least, suggests the seething intensity of a man who has abandoned personal image as a way to power his ego.

The cross stamped on the back of his head completes the maladjusted look. The tattoo is black and blocky, dressed with a few light, runic details. Christian imagery with a Norse twist. Is Bradley a full-on Nazi? Has he branded himself to atone for some past sin? Cell Block appears to be presenting a protagonist who will resort to violence as a reflex, a way to contextualise and work through any emotion or issue that overwhelms his dull processing powers. Writer-director S Craig Zahler then contradicts this knee-jerking assumption with two back-to-back scenes of emasculation that should, if we successfully judged this book by its cover, instantly summon up savagery. First Bradley loses his job, then his marriage is threatened.

The first detail Cell Block uses to dispel our worst fears about Bradley is a brief look at the interpersonal dynamics at play in the job he has just lost. While Bradley's white boss demonstrates commiseration, it's clear he's going through the motions. The sole note of sincerity comes from a black colleague named James (Peter Jay Fernandez) who goes out of his way to assure Bradley that if work picks up, he'll nag the boss to get him back. Bradley is polite but curt in this instance but Vaughn's performance speaks more to a wounded pride than any underlining bigotry.

Regardless of how the exchange fits into the film as a whole, there's a nagging sense that the James character interjects at this point to signal (rather bluntly) to the audience that Bradley might not be quite as vile as we assume. Zahler has used this slippery trick before, utilising a minority voice to dispel any mounting unease surrounding both the in-text white leads and the artistic intentions of the filmmakers - before the residents of Bright Hope posse up in Bone Tomahawk they take the time to consult with Zahn McClarnon's Professor, a Native American who exists in the film solely to explain, then condemn, the actions of the film's cave-dwelling troglodytes.

Cell Block quickly gets back on track with a second, more personal note of castration. Bradley returns home to find his wife Lauren (Jennifer Carpenter) sat in her car. It quickly emerges that she's been seeing someone else and that she's considering leaving him. He sends her into their poky little home and stays outside to seethe. Finally he explodes, attacking her car. He starts by shattering the side window with his bare hands. His fists don't instantly accomplish the task, it takes a few goes before he is able to punch through the laminated glass. He destroys the wing mirror then attacks the hood of the car, prising it off with his bare hands, tossing it aside when he's finished.

The violence starts explosive and frenzied but quickly becomes calm and methodical, therapeutic even. Bradley is expelling his emotions through systematic destruction. In this moment he is scary and monstrous, like some unfeeling slasher movie monster. Zahler immediately undercuts this sense of mounting threat by having Bradley calmly enter his house and engage in a conversation with his wife that is not only sensible but surprisingly tender. He is willing to listen to Lauren and talk through her feelings regarding the failings in their relationship. Most importantly, he is prepared to make an immediate commitment to her and their future together.

Before he has even set foot in Don Johnson's decaying medieval clink Bradley has beaten a car to death with his bare hands then calmly devised a plan to make his wife happier and more comfortable. He decides to return to a life of crime, transporting drugs for a local crime boss. The decision has a sacrificial quality about it - Bradley is prepared to feed himself into a meat-grinder to ensure that he can provide for his family. Brawl in Cell Block 99 takes its time, building early scenes and situations around a character that we come to understand as grim but determined. There's a certain inevitability about Bradley Thomas. If he says he's going to do something, come hell or high water, he will do it.
Posted by Chris Ready at 22:31:00