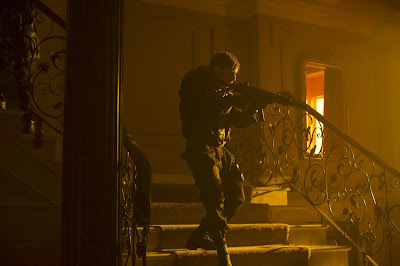 6 Days opens with six determined men jogging along resplendent Kensington streets, barely even attempting to conceal their Soviet surplus machine-pistols. After spooking a few pedestrians they pile into a Hyde Park terrace (that looks like a fortress rendered as a listed building) then take hostages, initiating 1980's Iranian Embassy Siege. Director Toa Fraser doesn't dwell on this seizure as an embedded, boiling point situation though. Likewise, Glenn Standring's screenplay doesn't delineate each individual member of the Democratic Revolutionary Front for the Liberation of Arabistan, their wider political motivations or even the majority of the captives they take.

The event is instead used to power a film assembled from differing viewpoints within the British establishment; how they intertwine and sometimes contrast. The weakest, and most underwritten, of these viewpoint comes from the small army of journalists that gather outside the building to rubberneck and then weakly discuss the ethical implications of said rubbernecking. Abbie Cornish, as BBC reporter Kate Adie, opts to deliver the journalist's signature staccato readings as the kind of breathy bellows you'd expect from a Chris Morris newsreader. Mark Strong offers the police perspective as Chief Inspector Max Vernon. The Metropolitan policeman functions as an intermediary, desperately trying to negotiate a peaceful resolution with Ben Turner's Salim, the sympathetic voice of the hostage takers.

6 Days most exciting moments revolve around the SAS team hiding in an adjacent building, posing as cleaners. The group spend the days leading up to their eventual assault drilling a variety of potential attacks and watching the snooker. Their scenes have an anxious, stop-start rhythm to them as the soldiers plan around both the terrorists' actions and the limits placed on them by a top brass looking for a public relations coup - a nighttime ambush is mooted but dismissed by a grumbling Cobra committee for being too aggressively efficient. This simmering, violent frustration is exemplified by Jamie Bell's performance as Rusty Firmin, an elite soldier blessed with the cocky enthusiasm of a pub fighter. Fraser successfully channels the actor's fitful, overflowing energy with an exemplary piece of mid-point violence that sees Firmin and pals smashing a stout, Plaxton coach to pieces with gleaming fire axes and a stainless steel ladder.
Posted by Chris Ready at 23:19:00