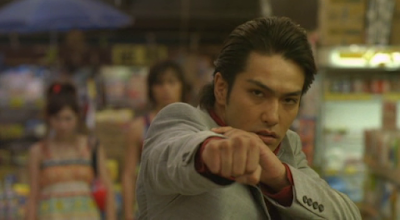 Takashi Miike brings his breathless V-Cinema flair to a video game adaptation, transforming Sega's long-running Yakuza series into a one-crazy-night movie set in a sweltering red-light district. Kazuki Kitamura plays Kiryu, an indefatigable brawler who has set himself the task of reuniting a street waif with her absent, mobbed up, mother. This search forms the backbone of the film, allowing Kiryu to cross paths with a variety of strange people on their own discursive adventures. It's not often a video game movie even attempts to translate its originator's mechanical make-up but Miike is happy to engage here, successfully tapping into the side-quest system of the PlayStation releases to power his own street-level Short Cuts.

This anthology approach keeps Kiryu present but once-removed, a force of nature who briefly disrupts and even alters the trajectory of people's lives - a young couple who witness Kiryu's louche, expert violence are inspired to turn to criminality themselves. The real fun in Like A Dragon though are the film's fight scenes. Miike and editor Yasushi Shimamura combine the propulsive, hand-held energy of a genre classic like Kinji Fukasaku's Street Mobster with the engorged, eye-catching visual language of interactive games. An early to-do in an overstocked discount store stands out thanks to Kitamura's ability to convincingly roll from opponent to opponent, trashing both his assailants and the towering bargains that encircle them. Kitamura's got a great look, decked out in a fitted grey suit with slicked back hair; the actor is able to convey both the noble centre of a do-gooder like Kiryu as well as the bullying, venomous streak that keeps him mired in this shady profession.
Posted by Chris Ready at 21:11:00