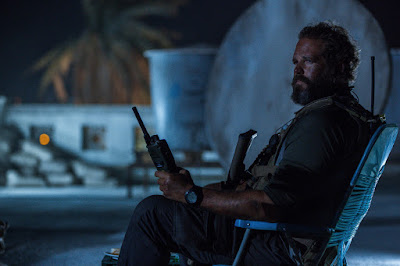 Herr Bay dials it down. Instead of his usual coke and catwalks take on American exceptionalism, we get a refreshingly chaotic Fox News reconstruction that proposes the Benghazi siege as a critical moment in the Jocks vs Nerds debate. This is Bay seizing his moment, daring to dream of post-American Sniper box office (Oscar?) glory whilst simultaneously raking away at that security contractor itch that hounded his Transformers franchise. 13 Hours is basically Cemetery Wind: The Movie. A Mozambique drilling, brass-checking, thump of new machinery that dies alone on its arse every time someone tries to string a reflective sentence together.

As ever, Bay struggles with human perspectives. The operators are portrayed as malfunctioning kill-bots that occasionally buzz out the kind of human experience an alien might gleam from an infomercial. Conversely, the CIA are nebbish ditherers incapable of making any decision more forthright than passive observation. David Costabile's Chief is positioned as the kind of hysterical white collar dork Bay insists prop up the flabby mid-sections of his Bad Boys films. He's here solely to frustrate commitment. Contrast that arrangement with a silent, mechanical opposing force that rises out of a literal zombie land before attacking in increasingly hectic wave formations and it's clear where Bay's ire is directed - inaction is the only true opposition.
Posted by Chris Ready at 21:37:00