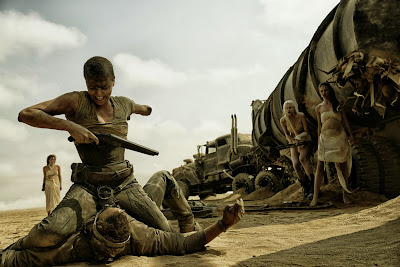 In Mad Max: Fury Road the title role slips a little further into the mythic. George Miller and co-writers Brendan McCarthy and Nico Lathouris deliberately posit a situation that doesn't quite align with the previous Max Rockatansky stories. Tom Hardy's take hears voices. He's haunted by visions of a woman, an Aboriginal man, and a child who calls him by his first name. Max hasn't just failed a family (his?), he's failed a community. Mel Gibson's Max wandered out into the wasteland to find something big enough to kill him. Hardy's Max seeks escape.

This Max is out of time, the factions and systems he brushes up against are well-established to the point of enjoying several distinct industries. This isn't the day after, this is decades. A generation. The Smegma Crazies have settled into a corner and started breeding. Hugh Keays-Byrne's Immortan Joe is the convoy Khan, a diseased, barrel-chested Daddy who's willing to risk everything he's made just so he can hold a perfect son. His Citadel is awash with water and greenery but his humans, his property, are still born with lumps and irradiated half-lives. 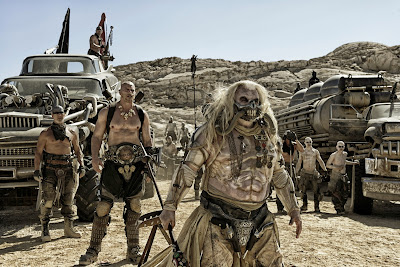 In Joe's world healthy women are fashion shoot chattel to be hoarded in bank vaults. Joe's wives flee after collectively deciding that they don't want to raise warlord juniors. Men are surplus to requirement, Joe's doing all the fathering so their shaved heads are filled up with white line fatalism, McCarthy's Skin kids swept up in a Freakwave. God is the all-powerful V8, a burning chromed skull that sits under a divine light hoarding fetishised steering wheels. These War Boys spray paint their teeth, hoping to emulate this deity on their way to the great pile-up in the sky.

The Radback teems with enemies to all, scattered gangs with graphic identities, their prevailing aesthetics weird off-shots of Joe's roughly hewn hot rods. The most striking are The Buzzards, a gang of shrivelled up sand people encased in vehicles that look like the Monster Minds from Jayce and the Wheeled Warriors as dressed by Peter Weir's The Cars That Ate Paris. Each machine is a mess of rusty bayonets, pregnant with tetanus, outfitted with grasping mechanical arms and circular saws.

Despite all this progress, Max hasn't aged. He's a raggedy man frozen in his defining moment. This free-wheeling approach to continuity recalls Akira Kurosawa's two bodyguard films, Yojimbo and Sanjuro. Each film taking place in a completely different time period, the spectral, problem solving hero the only constant. There's also a touch of Seiji Miyaguchi's super swordsman from Seven Samurai in how Max casually tackles a pursuing tank. 007's in the mix as well - like Hardy, Sean Connery, Roger Moore, Timothy Dalton and Pierce Brosnan all cracked skulls for decades while nursing a vague, sense memory of George Lazenby's departed wife. 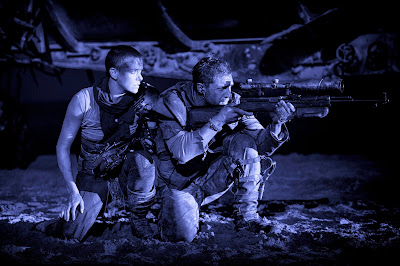 Since this is a reintroduction Max has to develop and change. He begins his adventure in bondage, an O-neg commodity, muzzled and manacled so he can be slowly drained to prolong Nicholas Hoult's flagging War Boy, Nux. When Max joins the freedom convoy he's violent and irritable. Max is the nervous energy in Fury Road, it falls to Charlize Theron's Imperator Furiosa to provide a sense of stability. She's Aliens' Ellen Ripley come again - quiet, capable and utterly commanding. If anything, Max is trying to impress her.

Theron has priors with this kind of role. Her Meredith Vickers in Prometheus was also essentially the same kind of character as Ripley was in Alien. Unfortunately Ridley Scott's newer film chose to interpret Vickers' by-the-book pragmatism as the behaviour of a spoilsport. In Fury Road Theron's allowed to sing. She drives the rig, she calls the shots. Rather than jostle for the lead Max slots into a similar role as Michael Biehn's Hicks, a comfortable component, happy to assist. Eventually their relationship transcends language entirely, both parties able to scramble around the tanker, assured that their ally is doing exactly what needs to be done. Their actions are ultimately interchangeable. 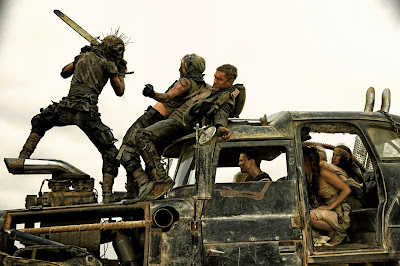 George Miller and cinematographer John Seale approach action laser focused on clarity. The frame is stable, often dreamlike in how it hovers around the conflict. Moments are expressed clearly and concisely, you never feel like editor Margaret Sixel is having to engineer excitement. Everything you need to know is communicated in an image or a sound. Since the entire film is a never-ending chase we spend a lot of that time watching fragile, barely clothed humans climbing all over speeding, filthy machinery. It's the thrill of watching Peter Kent casually hop from a pickup to a big rig in Terminator 2: Judgment Day exploded to feature length.

During Dredd's original theatrical release Alex Garland spoke about a sequel that would adapt Pat Mills, Mike McMahon and Brian Bolland's The Cursed Earth storyline. After that film tanked it seemed unlikely that we'd see a film about a highly motivated cop leading a ragtag group across an unyielding desert, pursued by radioactive mutants. As it turns out, George Miller has delivered the best possible version of that premise. Fury Road is an overcranked treat full of white impact frames and distant carrion squawks that's exactly as excellent as your memory of Mad Max 2.
Posted by Chris Ready at 13:09:00