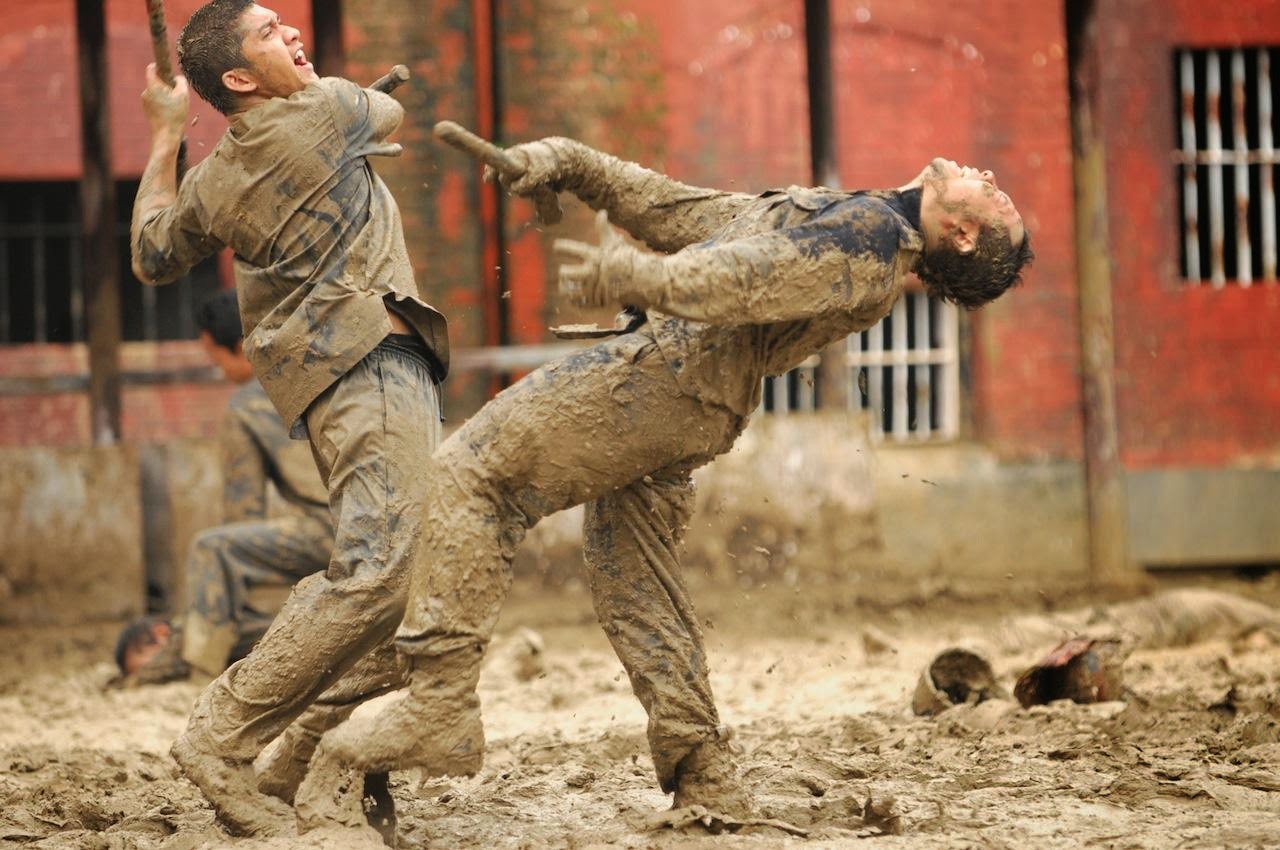 The Raid 2 has attracted comparisons with Terminator 2: Judgment Day, presumably because, like Cameron's sequel, it takes an intense, low budget idea and explodes it in a million different directions. As with T2, Raid 2 is closer to a series of successive phases than an organic three act. There's a prison section that plays like Alan Clarke doing Riki-Oh, then Super Cop wanders into a dilute version of a Johnnie To gangster film. It's interesting that this is the structure Gareth Evans has chosen for his sequel. Raid 2's story isn't just a bare bones set-up for martial arts action, there's a real attempt here to create an engaging dynastic struggle.

While this aspiration doesn't quite work - Iko Uwais' undercover rookie Rama never really impacts on how the various betrayals unfold - the frame does provide ample opportunity for Rama to get himself into trouble. There's probably an argument to be made that Raid 2 is too long, and too action-packed. The film is exhausting, piling on the mayhem for a finale that breathlessly moves through several successive boss encounters. However Evans never loses sight of how these events physically affect his hero. As in The Raid, Rama suffers and adapts. The story is told in how the hero fights. Recurring enemies are never considered the same way twice - Rama learns from his mistakes.

This is best expressed in how he tackles repeated bouts with Cecep Arif Rahman's Assassin. When they first meet Rama expects to destroy him, attacking him as if he was disposable muscle. When this proves unsuccessful, Rama changes tact. For their next battle, Rama slows himself down, allowing an Enter the Dragon style stance-off to happen. Rama recognises an arrogance in the Assassin, then uses the opportunity to learn and overcome his particular style of Silat. In a sense, Evans is eating his cake and having it too. For broad action interludes Rama is Bruce Lee demolishing subordinates. For main-events, he's Jackie Chan in his period films, soaking up punishment and eventually winning by refusing to lose.

Raid 2 also functions as a reminder for how exciting action films can be. Hollywood's obsession with computer generated superheroics is numbing, we're stuck firmly in a place where tentpole films use animation techniques to illustrate an impression of action. There's never a sense that anyone's in any real danger, and the stylised dynamics typical to animation are dialled way back to conform to an idea of reality. It's gotten so bad that Captain America: The Winter Soldier impressed recently entirely due to a preference for real auto-destruction. Rest assured that the stunts in that film are pedestrian compared to the wonders Evans and co conjure up here.

For his car crash setpiece, Evans has three distinct levels of carefully composed action competing for attention. First there's a punch-drunk Rama stuck fighting heavies within the confines of a car. Chasing and crashing into them is mob lieutenant Eka, attempting to return the recent favour Rama has done him. Finally there are fleets of enemy cars and motorbikes hot on Eka's heels. Evans flicks back and forth between these engagements, giving us an update then moving on to the next collision. This is the point Evans' genre mash-ups work best. We get cramped martial arts, car crashes, and human level stunt work as fragile, injured people transfer themselves between speeding vehicles.

Above all, Raid 2 is just exciting. It's long past time we had another filmmaker who views action not as something you hand off to a second unit, but as an extension and a comment on the unfolding narrative. Raid 2's action feels considered and authored rather than simply accomplished. Arm bruising back and forths never sag, there's always a shocking detail or injury to make you sit up. Evans and his team have mastered the pop, every single confrontation containing a prompt to either cheer or groan. Raid 2 is sustained skill and ingenuity. It's the Braindead of fight films, it's Hard Boiled come again. It's overwhelming.
Posted by Chris Ready at 12:18:00