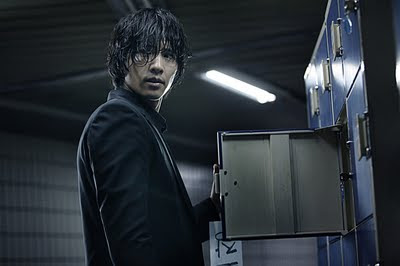 Cha Tae-sik is still, a ghost that haunts a slum tenement. He spends his days hidden in a pawn brokers doling out pocket money to junkies and strays. He keeps himself removed, and impersonal. Half his face is hidden by a mop of unkempt hair, eyes frequently fixed elsewhere. He's Spike Spiegel's languid live-action doppelganger; all boredom and determined disinclination. Tae-sik's sole concession to company is a chatty little girl named So-mi who needs somewhere else to be while her mum shoots up. After some ambitious, but ill-considered, swindling said mother finds herself gobbled up by the organ trade. So-mi is enslaved, drafted to serve a drug trafficking underclass. Tae-sik isn't pleased. He must move now. The Man from Nowhere plays around with prolonged in-action. It understands how to slowly trickle out hero information for maximum pop. It's aware enough to strand its protagonists in unfavourable odds situations just as his past life as a human weapon is teased to light. Violence is kept intimate and ruinous - knees on noses and knives on arteries. Above all, The Man from Nowhere knows that the best kind of avenger is one who no longer gives a fuck. Phantom men with no ties, dedicating their dying act to the utter extermination of everything and everyone foolish enough to stand in their way.
Posted by Chris Ready at 19:46:00

Email ThisBlogThis!Share to TwitterShare to FacebookShare to Pinterest
Labels: 2010, Films, Lee Jeong-beom, The Man From Nowhere

I'm so glad I wasn't the only one who noticed he would make the perfect Spike Spiegel. Definitely better than Keanu Reeves. It was a great movie too.

I thought the exact same thing about spike, as far as im concerned he is spike.