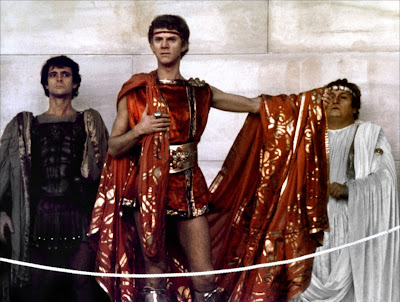 Caligula is an almost universally reviled film, castigated for an endemic vulgarity that sees British stage thesps sharing screen space with clips of bleed-in pornography. At best, this film is thought of as a high concept oddity, a semi-serious sandal epic clashing with the short stroke urges of a smut peddler. This is an ugly film, why should it be anything but? Malcolm McDowell's Caligula is an impression of a person, his fraught upbringing under the heel of Peter O'Toole's Tiberius has done nothing but sharpen his instinct for survival. As Tiberius's last days drift along, we get a sense that Caligula is his favourite plaything - an almost equal playing the role of an indefatigable child. Caligula is able to neatly sidestep constant threats upon his life, whilst maintaining a smile. Tiberius appears to be grooming his heir as an extinction instrument for the concept of Rome.

Once in power Caligula declares himself a God, and sets about equalising his cowed ego by heaping a relentless misery on anyone within reach. Lensed at the tail-end of the 1970s, you could read Caligula as a punk overlord, a venomous little shit given to humiliating the ruling class for their phony servility. The new emperor drafts laws that make whores of politician's wives, and declares full action warfare on ponds to humiliate his armed forces. Equally, Caligula could be contextualised as a tyrant brat, a sulking infant who treats the world and all in it as his easily replaceable playthings. Lives are meaningless to this monster; inconvenience a capitol crime, punishable by torture and death.

Fear pervades the film, Caligula is fascinated by it. Having matured in peril, the ruler seems to be daring his subordinates to kill him. As if he finds dominion boring, wishing to return to his former state to test how sharp his excuses have remained after years of bloated indulgence. Although not necessarily a good film, there's a certain honesty in weaving real orgies into a film about Roman decadence. Frequently the digressions take on a metatextual quality, simultaneously forwarding the idea that proximity to such Godhood is an all-consuming aphrodisiac, and filling in the blanks for serious actors disinclined to fuck for film. Likewise, there's a sense of spectacle in seeing hundreds of nervous, dancing extras suffering against vast psychologically spare backdrops. Caligula the film is equal parts plucky and revolting, just like its subject.
Posted by Chris Ready at 19:38:00