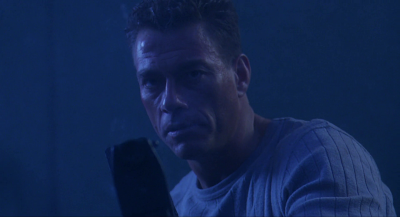 Jean-Claude Van Damme is back as Luc Deveraux. Universal Soldier's reanimated infantryman has beaten back the spectre of death and is now living as a regular, boring human with a job and a family (presumably a mortgage too). He's overcome the kill-bot programming written on top of his former personality, as well as the incessant need to ice himself down. Deveraux's a new man. Quite how the pointedly deceased grunt has been able to transition from a walking, rotting corpse to a working stiff isn't covered here in any great detail. Who cares right? Mic Rodger's film certainly doesn't - Van Damme's got faces to pull, stunt men to kick.

Universal Soldier: The Return tosses off any idea of physical or psychological rehabilitation for Deveraux. The character is stripped of all the emotional depth you'd expect from someone who has been friendly fired, returned to life as an automaton, then had to fight through the military's multi-tiered murder coding to stake a claim on his own, lapsed humanity. Gone too is the stability promised by Ally Walker's Veronica Roberts, Deveraux's love interest in the previous film. The spunky reporter has died off-screen, leaving Luc with an accident-prone daughter he barely frets about. It's a lot of circuitous, disappointing corrections upfront just to position Van Damme as a mugging action figure with a pronounced interest in female nudity. Seriously, Deveraux doesn't just go cross-eyed staring at his exposed, fitness model colleague Kiana Tom, the entire plot hinges on his familiarity with Internet strip shows.

Deveraux, despite being chewed-up, spat out, then chewed up again by the US government, is currently working alongside the next generation of UniSols in some ill-defined PR / scab role. The lumpy, grotesquely muscled zombies, as exemplified by pro-wrestling's own Bill Goldberg, all seem to loathe their human attache, attacking him at every available opportunity. Any notion that this emnity might be grounded in the cold storage lads resenting Deveraux's freedom to leave their air-conditioned mausoleum and father children isn't even on Return's radar. Mic Rodgers' film is content to chug along, monotonously drawing husky men together so that they can pulverise barely dressed sets while the audience suffer through Static-X tracks.
Posted by Chris Ready at 18:03:00