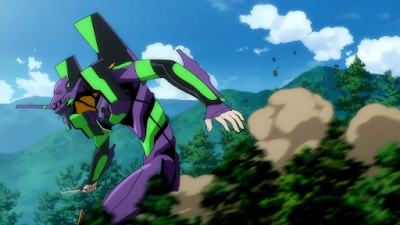 Like the television series it reconfigures, Evangelion: 1.11: You Are (Not) Alone is a giant robot story stripped of the superficial heroics and pat wish-fulfilment you typically find in a battling titan show. Earth is under siege, invaded by a race of heavenly aliens who view humanity as vermin. Mankind's only hope are child pilots driving massive, heavy armoured artificial humans who are able to meet these Angels in single-combat. Unfortunately for the selected children, climbing inside these towering monsters is a sacrificial act. Their strength and agility may be amplified to celestial levels but so too are their worries and neuroses. To reflect this contextual shift, You Are (Not) Alone is assembled with a brisk, bullet-point distress that unfolds like an anxiety dream.

Shinji Ikari, a Milhousian dud perpetually dressed for school, appears in an abandoned city currently functioning as an arena for a futuristic-but-overwhelmed military and an invincible, skeletal alien. Before he's had a chance to fully take in his irrelevance, Shinji is scooped up by Misato Katsuragi, a confident, attractive (so doubly intimidating) Lieutenant Colonel who works with Ikari's emotionally remote Dad. Before long the boy finds himself in a high-intensity data room staffed by scientists and military personnel. Shinji surrounded by dozens of  professional adults, all united in thought, working towards one withering expectation. He has been selected to do the impossible. Shinji is to undress, climb inside a building-sized battle clone then attack the rampaging monster - one a sub-nuclear land mine couldn't phase - and save the city.

Like Anno's other feature-length truncation Gunbuster: The Movie, the accelerated logic of three-act film compounds this re-telling's dreamier qualities. Transforming city Tokyo-3 resets and recovers thanks to unseen collective action and, since seasons never change on this off-kilter world, it's difficult to get a sense of how much time is passing between sorties. Shinji is stuck in a purgatorial prison, ignored by a disinterested father and struggling to connect with his closest contemporary, a robotic teenage girl named Rei. Rather than deconstruct the conceits underpinning his film, writer Hideaki Anno (co-directing alongside Masayuki and Kazuya Tsurumaki) embraces, even accentuates, the absurdities built into the super robot sub-genre. The sheer horror of Shinji's task, presented to him before he's had any possible chance to prepare, is played terrifyingly straight. Shinji, a spare child called in when the preferred pilot is too injured to continue, exemplifies a kind of anti-heroic inactivity. This informs his place within the wider piece. He hasn't pursued this life. He has, God help him, been chosen for it.
Posted by Chris Ready at 14:35:00