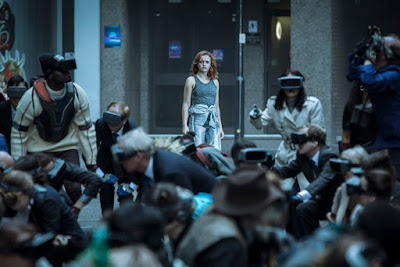 Discombobulation doesn't quite cover the experience of watching Ready Player One, a film that posits eternal poverty and the total defeat of imagination as acceptable prices to pay to live in a Funko-Popped wonderland. Everything in Steven Spielberg's film is a reference, from feature players to props and laser gun foley. Not the kind of massaged, satirised call-backs you might find in a Bush Sr era The Simpsons either, this is the cold, naked replication of Family Guy. Characters and ideas are torn out of their context then played, at length, as subordinate structural mulch in a narrative that revolves around an unstoppable trivia bore.

Strangest of all, Ready Player One presents your standard heroic journey freed from an overarching sense of defiance. Tye Sheridan's Wade Watts isn't trying to sweep away the dominant culture of zapped-out poors, he's complicit. A collaborator. A zealous fanboy deep in thrall to a dead billionaire who couldn't navigate a conversation unless it explicitly catered to what he wanted to hear. There are asides about food riots and ruinous ecological shifts but it's Mark Rylance's James Halliday that appears to have done the most damage to mankind. Apart from creating an accessible drop-out box, he's tied up trillions and a generation of thinkers trying to decode his death bed tantrum. To wit, the wealthiest company in the world is dedicated to propagating Halliday's (almost) unwinnable treasure hunt while the second wealthiest company in the world runs Victorian workhouses committed to pulling it apart. Pizza Hut's still going though.

Ready Player One's ceaseless use of propulsive movement does, occasionally, threaten to capture the imagination. Spielberg taking a similarly chaotic tact with computer generated cataclysm as his pal George Lucas did with Star Wars Episode III: Revenge of the Sith's opening space shoot-out. Layers and layers of detail, piled on top then baked into each other until every big money shot is absolutely swimming with animated actors, each devised to attract your attention. Action in Ready Player One is seldom used to excite in terms of character or accomplishment. It's plotted to overwhelm, rolling over its audience like a crushing wave of hyper-expensive magma. As the film cascades towards its conclusion, the seizure-inducing vistas begin to numb. The prevalence of licensed properties that turn up to look pretty then do nothing inspires nothing less than the acute disinterest felt watching a whacked-out but overplayed sponsored ad.
Posted by Chris Ready at 11:14:00