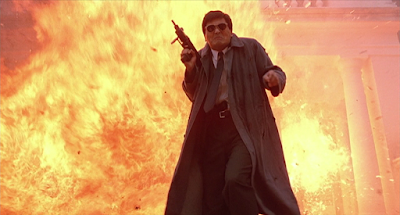 A Better Tomorrow II is a film being pulled in two different directions. The sequel suffered through a notoriously difficult post-production process with producer Tsui Hark and director John Woo at loggerheads, battling over final cut. In the end the film was drastically reshaped by an indifferent editing team whose only objective was to get the running time down to the kind of length that would facilitate the maximum amount of screenings to be jammed into a business day. Thus this thwarted epic barrels along at an ungainly pace, shedding characters and plot points as quickly as it introduces them. This discombobulation is compounded by the scenes and sequences used to reintroduce Chow Yun-Fat to the series.

Given the cultural impact of Chow Yun-Fat's debonair gangster Mark - Hong Kong teens took to wearing duster coats in tribute to the character, even though the island enjoys a sub-tropical climate - his death at the climax of the first film presented a problem for the production. Hark and Woo's solution was a long-lost identical twin brother named Ken. Despite the conceptually cheekiness, a lot of screen time is dedicated to establishing Ken as something more than a gratuitous lap of honour for Chow. So much so that Ken's adventures in America play like a distinct, emotionally hysterical sub-film. When not admonishing Italian mafiosi for not appreciating Chinese cuisine, Ken functions as supernaturally violent therapist for Dean Shek's catatonic Lung Sei.

Lung has lost both his business and his beloved daughter. Forced to flee to America after being framed for multiple murders, Lung finds himself an albatross around the neck of everyone he comes into contact with. Naturally, Ken is able to shoulder this burden, drawing his old friend out of a drooling stupor by relentlessly placing him in incredible danger. Eventually Lung snaps to, snatching up a pistol to protect his injured friend. This sense of tonal separation extends to the film's magnificent finale too. While a grim-faced Shek and the criminally underused Ti Lung pace around a colonial mansion blasting goons, Chow floats about, mugging to the camera like Bugs Bunny and standing worryingly close to several absolutely tremendous explosions.
Posted by Chris Ready at 17:24:00