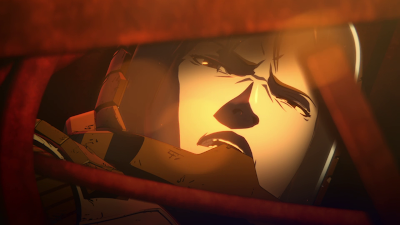 As it turns out Planet of the Monsters is an inciting incident stretched to feature length. Massive amounts of screen time are dedicated to unspooling the temporal run-around required to feature a home planet that has evolved into a host body for lethargic calamity. Godzilla himself may move with all the urgency of an iceberg but his design is a pleasant combination of the bulk seen in the Gareth Edwards' 2014 film and the flayed, volcanic musculature of Shin Godzilla. Godzilla's sheer size, far bigger than any previous incarnation, at least promises an interesting future debrief too. Shizuno and Sehsita's film may have a lot of aesthetic heft - as well as the chief monster design it is also beautifully lit throughout, making constant use of luminous, holographic computer read-outs - but, ultimately, it's also extremely dull. A film plotted not to entertain but to leave acres of dramatic wriggle room for the episodic sequels set to follow.
Posted by Chris Ready at 22:32:00