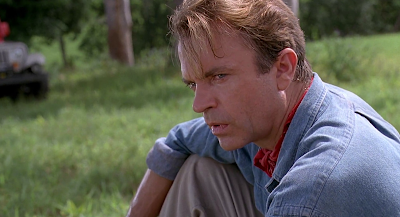 Jurassic Park puts us in the company of a succession of flawed, grasping men struggling with their place in the world. Their default coping mechanisms tend towards career. Whether through intent or just plain slightness of writing, the vast majority of males in Steven Spielberg's film are explicitly defined by their job. We have a couple of scientists, several corporate climbers, and even a Great White Hunter. Each, in turn, is proven flawed or even expendable. Men fail in Jurassic Park because they have no underlying responsibility, their skill sets are defined by ego and therefore found wanting.

The only specimen to transcend this holding pattern is Sam Neill's Dr Alan Grant, a grumpy palaeontologist. We are introduced to Grant in his professional capacity as a Dinosaur Dig Supervisor. Grant wanders around upsetting computers and frightening children with vivid descriptions of their consumption. Grant is in a relationship with Laura Dern's Dr Ellie Sattler, a much younger palaeobotanist. The difference in age suggests a kind of conspiratorial impropriety between the two, perhaps beginning in a University setting? Anyway, she wants him to settle down and have children. He'd rather poke around old bones. It's a poor start for Grant.

Grant has greatness thrust open him when the titular resort goes into meltdown leaving him stranded in the Tyrannosaurus paddock with two children in tow. Grant had been alarmed by the idea of offspring, they'd ruin his fun and probably smell. All in all, an extra responsibility he just doesn't need. Nevertheless, Grant warms to the youngsters quickly. Like himself, Joseph Mazzello's Tim is a walking dinosaur encyclopaedia, Ariana Richards' Lex is blonde and forthright like Dr Sattler. They're an instant, fully-formed representation of the kind of family the couple might expect to have.

The children are a leavening influence on Grant, not only do they force him to become stable and emotional available they even eke out his latent sense-of-humour. Grant has instantly understood that he has to take a very specific role in this situation, he must be strong and calm, towering above any danger the gang might find themselves in. In order to keep the children from becoming catatonic Grant must be their rock. Like the T-800 in Terminator 2: Judgment Day, Dr Grant has become a surrogate father. Maybe this is why the film struck such a chord with its young audience? Set aside the perennial prehistoric favourites and you have a piece that treats children as precious commodities that intrinsically confer purpose.
Posted by Chris Ready at 20:14:00