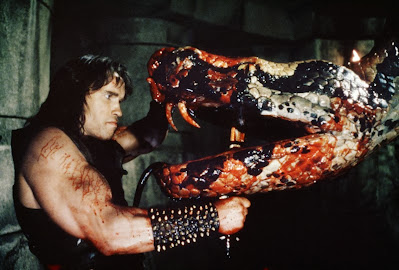 Conan the Barbarian is about a life completely dedicated to equalising a situation. Thulsa Doom, an otherworldly, apparently eternal magician, ransacks Conan's village, slaughtering his parents and his people. The child doesn't say a word. Instead he drinks in his enemy's face and flag, making them his motor. Sold into slavery and forced to suffer punishing manual labour, Conan abides, using the appalling situation to transform his body into the tool he needs for revenge.

Conan the Barbarian endures and enchants because it is about a man who is completely unbeatable. Every step in his life is designed to bring him back to the snake priest who ruined it. He doesn't run from his destiny, he embraces it. He races forwards, screaming, sword held high. Conan doesn't even chaff, you have to seek out a Director's Cut to hear him reflect and complain. The film, like the rest of John Milius' work, taps right into a basic, almost embarrassing facet of unreconstructed masculinity - the desire to be remote and unconquerable. It's male emotional autism on a vast, panoramic scale. If, as JG Ballard hailed it, Mad Max 2 is punk's Sistine Chapel then Conan is the heavy metal equivalent of Michelangelo's David.

Milius seems to regard the star as a natural phenomena. Milius and Duke Callaghan shoot Schwarzenegger like a mountain. A still, emotionless thing comfortable with silence and contemplation. The Martian deserts of Spain and the visual language of Sergio Leone is re-purposed to tell a pagan rock-opera in which long-haired roadies battle it out for mystical supremacy. Conan isn't about talking or explaining. He's all doing. Everything is communicated physically, his thought process reported through tight close-ups on Schwarzenegger's face bracketed by Basil Poledouris' pounding, prehistoric score. Milius wasn't considering Arnold as the heavily accented body builder he was, he saw him as the larger-than-life megastar he would become. This complete confidence actualises Schwarzenegger in the same way that The Wheel of Pain warped the young barbarian.
Posted by Chris Ready at 10:48:00