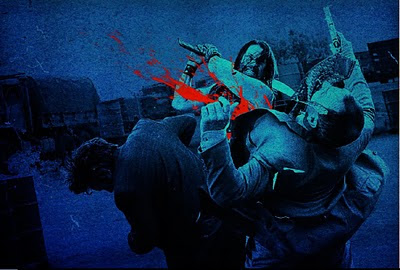 The physical effects work best in Machete, especially the thick workman frame of Danny Trejo. Trejo's Machete is a silent, scowling, granite lump. He meanders swiftly and violently through a burgeoning class war, trapped between sympathetic revolutionaries and crooked politicians as they quibble and posture about border crossing. Trejo is the movie, a GWAR fan's sketch of Charles Bronson, his face an all-points bulletin for lines and lumps; expression carved onto a brick. Elsewhere, find yet more evidence that the inherent falseness of computer generated destruction actually denies the kind of bratty glee it's supposed to induce. If a puppet or appliance rig is mangled during a stunt there's an immediate physical sense that you're watching something being broken. Paint it all in with CG, and the gag stalls on the brain signal that recognises its artifice. We know Machete isn't running real flunkies through, but we'd prefer he was ruining something that has physical space and weight, rather than miming yet another kill-thrust for a MacBook pick-up.
Posted by Chris Ready at 16:50:00