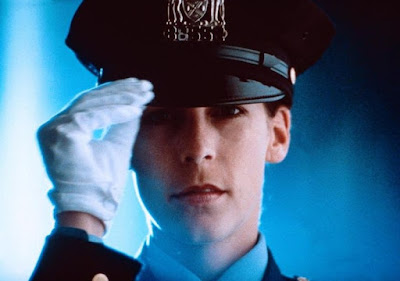 Blue Steel gives Kathryn Bigelow and Jamie Lee Curtis the opportunity to deliver a fresh take on the kind of wild card policing popular in the big deal action films of the 1980s. Instead of exploring something typical, like how a well-trained killing machine might fit into day-to-day law enforcement, Bigelow and co-writer Eric Red use gender identity to power their conflict. Curtis plays Megan Turner, a rookie cop surrounded by men who make repeated, verbal objections to her mere existence.

This conflict is an ever-present stress on Turner. At home, Turner's oafish father beats her peacemaker mother whenever his daughter isn't around. When she drops by he swills cheap beer and rants about the shame her career has brought on the family. At work even would-be allies. like Clancy Brown's Detective Nick Mann. make it their business to comment on her attractiveness and spin ribald tales about severed manhoods. Bigelow frames these situations in terms of territorial markers; established men communicating their indifference to Turner's presence, and any attendant (or expected) social niceties, by being deliberately vulgar. There will be no concessions for Turner based on her sex, she is treated as an interloper who must do all the adjusting in this new, hostile environment.

After gunning down Tom Sizemore's wild-eyed armed robber, Turner is unable to locate the criminal's pistol. It's been pocketed by Eugene Hunt, a gibbering commodities trader played by Ron Silver. Hunt becomes obsessed with Turner, he talks about her and her act of violence in terms of revelation. She has, quite accidentally, revealed something mind-blowing to this maniac. He attempts to court her as a civilian, taking her to expensive restaurants and charting impromptu helicopter rides, then emulates her in private by blasting holes through the hapless citizens of New York City. Blue Steel staggers a number of conclusions, each detailing how Turner copes with the bizarre responsibilities that have been thrust upon her.

Hunt looms large come the finale but Turner also finds time and space to resolve the situation at home. After another bruise appears on her mother's arm, Turner beats her father prone then threatens to turn him in. He repents and communicates his failings - he feels weak sometimes. Although she has overpowered her father physically Turner is still able to listen to and understand his flawed emotional needs. Unlike similar scenes in umpteen other, male dominated, action films the act of intervention is soothing and corrective rather than just nakedly assertive. Bigelow and Red are able to breath new life into a stale genre by using their female lead as a perspective (rather than a cheap device) that informs then reconfigures every aspect of their plotting.
Posted by Chris Ready at 00:45:00