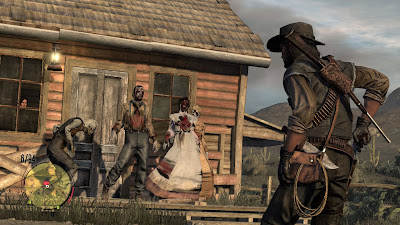 Aside from freeing Rockstar's free-roam template from dull health management, Red Dead Redemption excelled at providing an incentivised narrative. Although players likely didn't care too much about John Marston's imprisoned family, we were made to understand that our cowboy figure did. Marston yearned for their safe return. Balance for this single-minded questing was provided through the detailing of Marston as a character. He was a charming mix of grumpy, dead-pan mean and roughly hewn industrial gentry.

Marston's voice, provided by Rob Wiethoff, was a constant presence in Red Dead Redemption. He grumbled during fetch quests and yelped at danger. Success was often greeted with cheers. Rockstar San Diego crafted a hero you couldn't help but like. The studio also worked hard to make Marston's quest seem lightly absurd. There's a constant suggestion throughout that his efforts were in vain, and that his family were long gone. When an opportunity for contact finally did arise the player's feelings matched Marston's own. Both were tentative and fearful. This was Red Dead Redemption's greatest success - the player and avatar in emotionally alignment; desperate to get home, but terrified at what they might find when they get there.
Posted by Chris Ready at 19:07:00