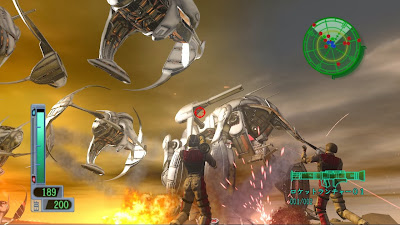 Earth Defence Force 2017 was a crack compulsive shooter from budget developer Sandlot. You took control of a slender, androgynous suicide soldier, the only chap (or chapette) with chops enough to halt an avalanche of rampaging space aliens. All the atmoic age enemy archetypes were present and correct. Mutated insects, laser robots, hubcap spacecraft, and, most impressively, radioactive mecha kaiju. All massive. All aggressive.

Players got to trample the lot with a spiralling arms race facilitated by captured, flat, tech pick-ups. Weapons ran the gamut from small, useless welding torches to sub-nuclear screen wipers. The higher the difficulty, the better your technology seizure. Your hero was aided throughout by teams of endlessly enthusiastic CPU troopers that chanted slogans and died at a brush. Cities crumbled at the slightest barrage, nearly everything on-screen could be destroyed. Better still, you were never penalised for this collateral damage. As long as you made it, everything else was extraneous. EDF suffered no stealth interruptions or an enforced use of chugging, vulnerable vehicles. If allies fell, it was their hard cheese. Earth Defence Force 2017 was simply fifty odd levels of relentless enemy blasting. As pure as Space Invaders.
Posted by Chris Ready at 12:42:00