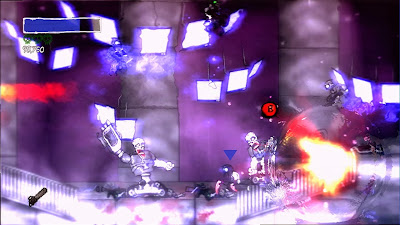 The Dishwasher: Dead Samurai was like playing around with an interactive version of a school exercise book, its pages filled up with inky, lesson wasting, violence doodles. Stylistically, the artist is operating somewhere between Mirage Studio's Ninja Turtles comics and the grungy miserablism of James O'Barr. Characters are hunched and pained as the march towards their splotchy oblivion. Created by one-man dev team James Silva, Dishwasher would be notable on aesthetics alone. It genuinely feels like you're engaging with one person's imagination, all their favourite toys and tropes chucked into a meat grinder with themselves cast as the heroic kitchen staffer. What makes Dishwasher exceptional though is the Capcom fluid combat system. As well as layering in monochrome blitzing and crash-zoom reward prompts, Silva understood the importance of sound cues. As chaotic as the on-screen action got, the distinct, actionable noises ascribed to enemy attacks and player movement ensured you were never working with incomplete data.
Posted by Chris Ready at 21:48:00