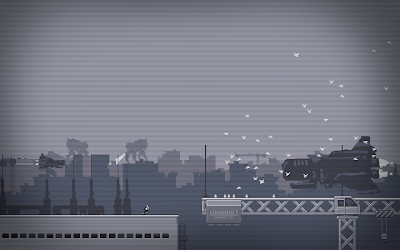 iPhone games often struggled mapping the multiple inputs associated with modern video games. In poorer examples players wound up with confusing drag-tap gymnastics, or, even worse, a controller map stamped on the screen. Not so in Adam Saltsman and Eric Johnson's fantastic Canabalt. Tasked with making your escape from a fracturing city, players assisted a speeding pixel man with well timed jump taps. Your tiny suit man was always running full pelt, you never had to worry about directional control, player input was simply judging the best time for him to jump. Stress came in the form of an ever-changing course. Buildings cracked and sagged, sinking beneath you. Alien machinery crashed in your immediate path, and building tops frequently failed to sync up. Canabalt was designed to be played as a rolling series of attempts. Failure wasn't penalised with anything other than an instant restart, repetition was nixed thanks to random course generation. You never knew what was coming next.
Posted by Chris Ready at 18:44:00