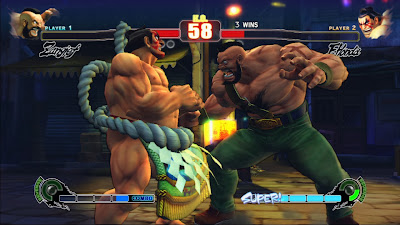 Despite creating the excellent polygon scrapper Rival Schools, Capcom has always struggled to translate its premier fighter franchise into a viable 3D property. During the fifth and sixth generations the Street Fighter licence was farmed out to Arika, a dev studio full of ex-Capcom staff, for the short-lived Street Fighter EX series. EX was a love-it or loathe-it side-step, hobbled out the gate in Europe thanks to lousy 50Hz conversions. Regardless, even on 60Hz import the results never touched contemporary 2D instalments. After the wonderful, but undersubscribed, Street Fighter III series it seemed like Ryu and friends were being slowly relegated to nostalgia prompts in big-budget franchise clashes.

The Street Fighter series unexpectedly bounced back in summer 2008 with the arcade release of Street Fighter IV, spearheaded by Yoshinori Ono and The Rumble Fish developer Dimps. Street Fighter IV ditched the arena roaming of modern fighters, instead sticking to 2D planes with 3D assets. The vast cast were rendered as chunky, colourful, charm lumps, blessed with spectacular ultra move movies, and Looney Tunes injury faces. Everything old was new again. Since then the basic gameplay has been tugged and tweaked over five distinct iterations, each designed for maximum scrutiny. At the beginning of this generation Street Fighter was washed up and bled dry. Likewise, the game's parent company Capcom has struggled since the departure of high-profile talents like Shinji Mikami and Hideki Kamiya. That the Street Fighter brand was resurrected so completely during this tumultuous period is nothing short of miraculous. Let's hope Capcom can eventually get their shit together long enough to do the same for the mouldering Resident Evil series.
Posted by Chris Ready at 19:20:00